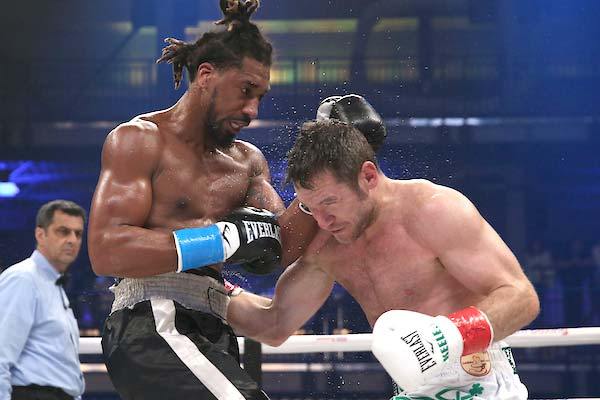 Middleweight world titlist Demetrius Andrade was not at his best, but he got the job done.

Andrade retained his 160-pound belt in a one-sided affair, dropping an overmatched Luke Keeler en-route to a ninth-round knockout Thursday at the Meridian at Island Gardens in Miami.

"I felt [my performance] was good," Andrade said. "I know Luke Keeler is a warrior. Today was my day. We felt good. We took him into deep waters and we sunk him."

The fight was the first of a four-bout contract extension between Andrade and promoter Eddie Hearn of Matchroom Boxing that was announced last week.

The opening bell began with fireworks as Andrade struck Keeler with a massive overhand left to send him to the canvas.

But to his credit, Keeler (17-3-1, 5 KO's), 32, of Ireland, took a beating and never quit, as Andrade, a southpaw, poured it on. In the second round, Keeler was in trouble again after he got hammered with another strong left hand and a right uppercut as the round came to an end.

Andrade went looking for the knockout and started to miss wildly as the fight wore on, particularly with his right hand. But on the other hand, Keeler was in no position to land anything significant, either.

In the ninth round, Keeler's brave run came to a halt as Andrade smashed him with a barrage of thudding blows, including a right uppercut that sent Keeler reeling into the ropes. Referee Telis Assimenios waved off the fight at 2:59.

Compubox, which calculates the total number of punches thrown and landed per fight, was further indication of just how lopsided the bout was. Andrade connected on 146 of 385 punches (38 percent), while Keeler landed a dismal 34 of 298 shots (11 percent).