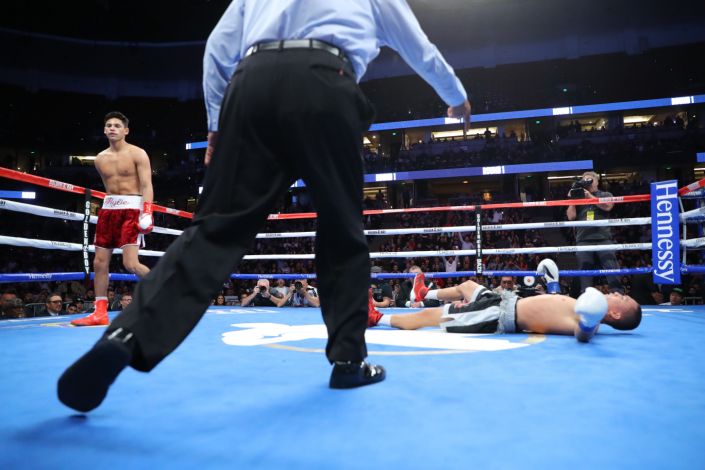 Love was not in the air for Ryan Garcia.

Garcia knocked out Francisco Fonseca in the first round of their lightweight bout, capping off Valentine's Day with a gift his foe may not remember, as a devastating counter left hook left him flat on his back before an announced crowd of 10,310 at Honda Center in Anaheim.

"It was good," Garcia said. "(The bout) didn't last that long, but I watched a video of Sugar Ray Robinson, and he did this little feint and threw the perfect left hook. I saw it and went for the left hook. Thought I was going to go longer, not going to lie. I respect Fonseca and thank him for the opportunity."

For Garcia, FightNights.com's prospect of the year, it was yet another impressive performance for the 21-year-old, who has exhibited distinguishable improvement since hiring trainer Eddy Reynoso, who was voted Boxing Writers Association of America's Trainer of the Year for 2019 and is also best known for developing boxing's biggest star, Canelo Alvarez, into one of the finest boxers in the sport.

Garcia has shown steady improvement under the direction of trainer Eddy Reynoso, best known for developing light heavyweight titleholder Canelo Alvarez into one of the best boxers in the world.

Fonseca (25-3-2, 19 KO's), 25, of Nicaragua, had won six of his last eight fights since suffering an eighth-round knockout against Gervonta Davis, but never had Fonseca been blown out in this fashion.

The victory could set up a possible fight with former three-division world titleholder Jorge Linares. If the fight happens, it will likely take place July 11 at Staples Center in Los Angeles.