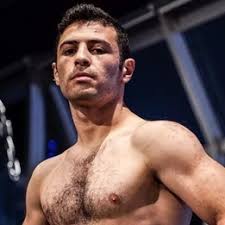 LAS VEGAS – Petros Ananyan showed up to Las Vegas and hit the jackpot.

Ananyan rallied to knock down and upset hard-hitting Subriel Matias in a 10-round unanimous decision on the undercard of the Deontay Wilder-Tyson Fury rematch at MGM Grand in Las Vegas.

The bout got off to a lethargic start, but in the third round, Matias, who was in control for the first half of the action, began connecting with left jabs to the head. Later in the frame, he went downstairs with an effective left-right combination to the body. But late in the round, Matias rocked Ananyan with a series of lefts and rights to the head. When they were walking to their respective corners at the conclusion of the round, Ananyan shook his head, "No," at Matias.

In the seventh round, everything changed when Ananyan badly hurt Matias with an overhand right while his foe was against the ropes. Matias spun to his left, but the shot proved to be damaging as he was sent reeling across the ring and into the ropes, which was scored a knockdown by referee Robert Byrd.

From rounds 8-10, Ananyan nailed Matias with the same shot repeatedly -- the overhand right, and mixed in a couple of uppercuts as well.

The judges scored the fight 96-93 and 95-94 (twice) for Ananyan, who improved to 15-2-2 with seven knockouts. Matias, who came into the match unbeaten with all of his wins coming by way of knockout, slipped to 15-1.

In the bout following, Javier Molina (21-2, 9 KOs) stunned former world title contender Amir Imam in an eight-round unanimous decision. The judges scored the bout 79-73 and 78-74 (twice) for Molina, who has won five bouts in a row since getting outpointed himself by secondary titlist Jamal James in January 2016 in Los Angeles.

The bout was far from spectacular. Molina did just enough in all of the rounds, but Imam hurt him with one minute, 30 seconds left in the bout. However, it was not enough to sway the judges.