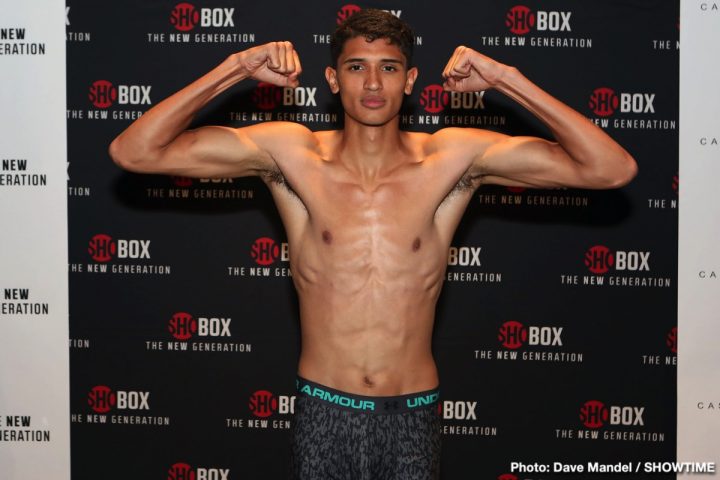 Fundora got his nose busted in the second round by previously unbeaten Daniel Lewis, but used his boxing skills to outpoint him in the pay-per-view opener to the Deontay Wilder-Tyson Fury heavyweight world title rematch at MGM Grand in Las Vegas.

The fight got off to a brisk start, as Fundora landed a solid uppercut in the first round, but the second round got the action cooking.

In the third round, Lewis shoved the 6′ 5½″ Fundora into the ropes, landing a left hook to the body in the process.

Fundora continued to struggle defensively in the fourth round as he walked into a straight left hand, a shot that caused his eyes to roll back.

Fundora rebounded with a strong fifth round. He began to use his height and reach from the outside. He connected with a straight left hand on Lewis (6-1, 4 KOs), 26, of Sydney, Australia, was swelling considerably under his right eye, and bleeding from his mouth.

The tables continued to shift in Fundora's favor in the sixth round. He clinched his opponent on the inside and landed several hard uppercuts, as Lewis' face remained visibly wounded.

The seventh frame was a tight one. Both fighters traded solid lefts and rights throughout the frame as time began to wind down on their 10-round affair.

In the ninth round, Fundora and Lewis were looking forward to making it to the finish line in a monotonous round. Both fighters were reddened from head-to-toe, but it was more evident on Lewis. Fundora appeared to do just enough to impress the judges.

Fundora cruised to the finish line in the final round, connecting with one-two combinations from the outside, but he still had to hold off a durable Lewis, who never layed off the gas pedal.