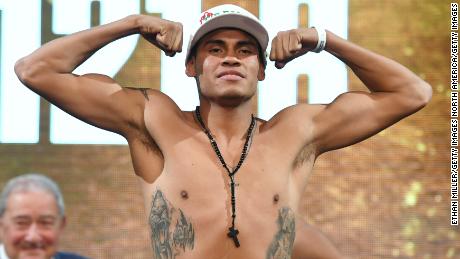 LAS VEGAS – In what could potentially be his final bout as a junior featherweight, Emanuel Navarette went out on top.

Navarette defended his WBO 126-pound world title for the fifth time as he outclassed Jeo Santisima en-route to an 11th-round stoppage in the second bout on the Deontay Wilder-Tyson Fury heavyweight world title rematch PPV card at MGM Grand in Las Vegas.

The opening frame was a feeling-out round as both fighters took the opportunity to say "hello" to one another.

Navarette, who won the world title in December 2018 by defeating former titlist Isaac Dogboe in an upset and stopped him in a subsequent rematch, appeared dehydrated at Friday's weigh-in and confirmed earlier in the week that his struggles of making weight had started to impact his preparations for the bout. However, that did not appear to hurt him against Santisima, as he dictated the tempo and the pace from the onset.

Bouncing on his toes, Navarette connected with a short uppercut in the second round and followed it up with a four-punch combinations on Santisima (19-3, 16 KO's), 23, of the Philippines, who was competing for his first world title.

Santisima went to work in the third round by attempting to attack the body of Navarette, who parried his attack and landed a stiff right hand that had Santisima back-peddling across the center of the ring. Late in the round, Navarette nailed Santisima with a left hook to the body and closed strong with a right hand.

Santisima swung for the fences with just over a minute, 20 seconds left in the third round, and paid the price as Navarette countered him with a sharp left hand.

At the midway point of the fifth round, Navarette (31-1, 27 KO's), 25, of Mexico, connected with a right hand that seemed to bother Santisima, who clinched. Soon after, he fell to the canvas, but referee Russell Mora ruled it a slip. Navarette then poured it on and chased Santisima across the ring, landing clobbering lefts and rights and left hooks to the body.

Navarette continued to control the tempo and the pace of the bout when he backed up Santisima with a left hand with a little over two minutes left in the eighth round.

With less than 40 seconds remaining in the fight, Navarrette looked for the knockout, landing roughly 15 unanswered punches as Santisima took a beating against the ropes from a plethora of left hooks, uppercuts, and left hooks to the body in a ferocious display.

In the 11th round, Navarette threw the kitchen sink at Santisima, and his shots connected with brutal precision, with his opponent's head twisting left and right upon impact. Santisima eventually collapsed to the canvas on his own feet. However, his corner had seen enough and threw in the towel.

The chief support bout to Wilder-Fury II saw former titlist Charles Martin wipe out Gerald Washington by sixth-round knockout. The bout was lethargic throughout, but Martin (28-2-1, 25 KOs) drilled the former title challenger Washington (20-4-1, 13 KOs) with a vicious left hand to the nose. He rose to his feet before the count of 10, but was on wobbly legs, which forced referee Tony Weeks to stop the fight