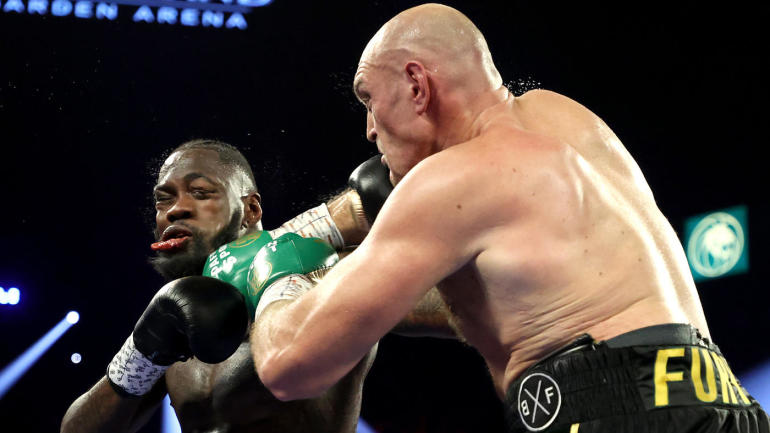 LAS VEGAS – Tyson Fury said he was going to knockout Deontay Wilder and was a man of his word.

Fury dropped Wilder twice, once in the third round, and a second time in the fifth, en-route to a one-sided seventh-round knockout Saturday in a highly-anticipated rematch before a sell-out crowd of 15,816 at MGM Grand in Las Vegas to become a two-time heavyweight world titleholder.

The bout also broke the gate for heavyweight world title boxing in Nevada, surpassing the 1999 rematch between Lennox Lewis and Evander Holyfield with $16,916,440.

In their first affair, Fury came out on the raw end of a split draw that a majority of ringside observers believed he had won. However, he had to show heart after suffering two knockdowns, including a hellacious one in the 12th and final round.

This time, it was Deontay Wilder’s turn. But this bout was nothing like the first -- Fury systemically beat down Wilder from pillar to post.

“Shout out to Wilder. He showed the heart of a champion. He is a warrior,” Fury said. “But I will say the king has returned.”

Fury scored an upset unanimous decision victory over future Hall of Famer Wladimir Klitschko in November 2015, winning three of the four world titles. But he never defended the belts. He subsequently battled depression and substance abuse problems and blew up in weight to nearly 400 pounds. But throughout his career, Fury has promised that on his best night, he could not be defeated. That, once again, proved to be true.

Both fighters put on an aggressive pace from the outset. Wilder connected with a hard jab in the first round and several of his signature right hands. However, Fury took the shots well.

In the second frame, Fury was effective with his jab and utilized his matchless head movement to throw Wilder off, which effectively neutralized his power. The aggressive masterclass for Fury (30-0-1, 21 KO’s), 31, of the United Kingdom, marched into the third round, where he dropped Wilder with a hard right hand. Wilder was able to get up, but was on unsteady legs.

“I’m doing good. Things like this happen,” Wilder, who suffered the first loss of his professional career, said. “The best man won tonight, but my corner threw in the towel, and I was ready to go out on my shield.”

Wilder said that he had issues coming into the bout, but did not go into details.

“I had a lot of things going on heading into this fight. It is what it is, but I make no excuses tonight,” he added. “I just wish my corner would have let me go out on my shield. I’m a warrior; he had a great performance, and we will be back stronger.”

After outboxing Wilder in the fourth round, Fury squeezed the gas pedal in the fifth, flooring Wilder again with a left hand to the body.

“I hit him with a clean right that dropped him, and he got back up. He is a warrior. He will be back. He will be champion again.

Fury was also deducted a point by referee Kenny Bayless for hitting during the break.

Fury rocked Wilder, who fought valiantly to survive, with lefts and rights as his foe stood against the ropes. But his corner had finally seen enough and threw in the towel. The time of the stoppage was 1:39.

“Even the greatest have lost and came back, that is just part of it. You just take it for what it is. I can make no excuses tonight. I had a lot of complications. But we’ll come back stronger next time around. This is what big-time boxing is all about, the best must fight the best. I appreciate all the fans that came out and supported the show, and I hope that everyone gets home safely,” Wilder said.

According to Compubox, Fury landed 58 power shots in less than seven rounds after landing just 38 in the first bout against Wilder. Fury connected on 82 of 267 punches (30 percent), while Wilder landed 34 of 141 punches (24 percent).