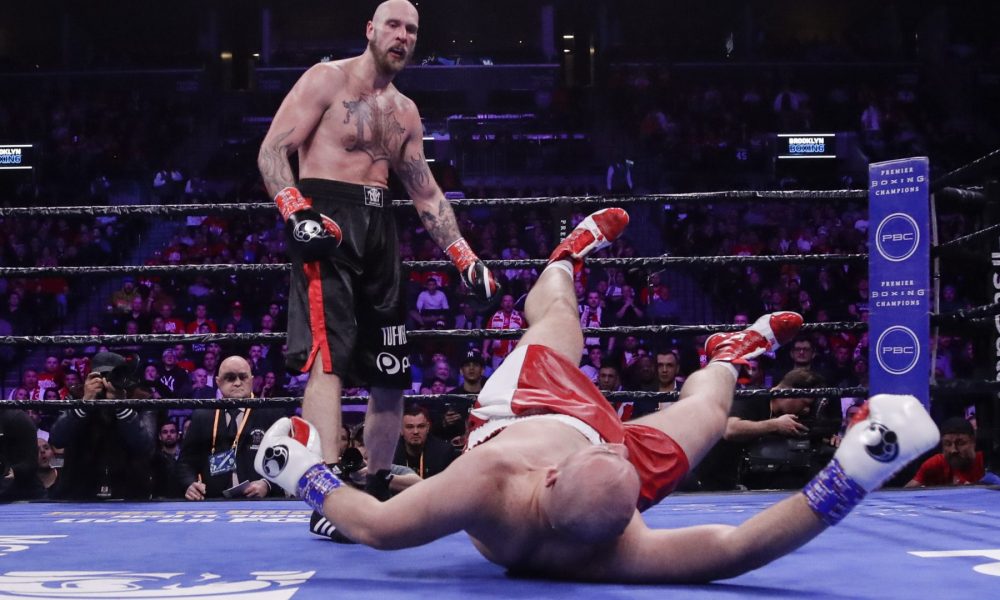 NEW YORK -- Robert Helenius came through with the upset special.

Helenius, who had taken a beating for most of the first three rounds, rallied to knock down and stop contender Adam Kownacki in the fourth round of a Premier Boxing Champions on FOX card Saturday evening before an announced crowd of 8,811 at Barclays Center in Brooklyn.

The bout was a title eliminator, and Helenius will eventually get a shot at one of three-belt world heavyweight titleholder Anthony Joshua's belts. However, Joshua has two other mandatory defenses to make this year, which will likely push a possible Helenius clash to 2021.

Kownacki was ahead 30-27, 29-28 and 29-28 on the scorecards after the third round and appeared likely to win, but the 6-foot-7, 239-pound Helenius (30-3, 19 KOs), a Sweden native based in Finland, connected with a strong right hand a left hook that floored Kownacki in the fourth round. It was a completely different fight after that point.

"It wasn't my night. It's boxing," a disappointed Kownacki said. "It's a tough sport, and things just didn't go my way tonight. It was a learning experience, and I'm going to go back to the drawing board and get back to work."

It was an exciting bout from the onset as Kownacki and Helenius exchanged hard shots to the head and body in the first round, although Kownacki appeared to do more damage.

Both fighters continued to exchange heavy leather in the second round, but Kownacki hurt Helenius with a left hook that had him in trouble at the end of the round.

Kownacki knocked Helenius around the ring in the third round. He landed an accumulation of left hooks, right hands, and body punches that had Helenius clinching.

"He just kept coming and coming. He's a good fighter. I have to give it to him," Helenius said. "My strength is to punch back when people come at me. It was a good fight and a tremendous opportunity for me to be here."

Helenius did just that in the fourth round when he floored Kownacki to one knee in the corner with a right hand, but referee David Fields incorrectly ruled that Kownacki had slipped. Then Helenius went for the kill.

"I knew that I hit him hard and I knew I just had to continue," Helenius said. "I knew he was still hurt after that punch."

Helenius followed up with a stiff right hand to the head, followed by a left hook that dropped and badly hurt Kownacki. Helenius pushed forward and stunned Kownacki with a plethora of combinations that forced him against the ropes. Kownacki fired back with a couple of punches that came nowhere close to landing. When Helenius continued to pour it on, that was when Fields stopped the fight at 1 minute, 8 seconds.

"He hit me with a good shot," Kownacki said. "I knew what was going on, but I'm just upset with myself. It is what it is."

Up until 2012, Helenius was regarded as one of the heavyweight division's top rising prospects after defeating the likes of former titlists' Samuel Peter, Siarhei Liakhovich, and former world title challenger Dereck Chisora. However, after undergoing shoulder surgery, many believed Helenius was no longer the same fighter. He suffered a sixth-round knockout loss to former world title contender Johann Duhaupas in 2016 a lopsided decision to top contender Dillian Whyte in 2017, and suffered an eighth-round knockout loss to former world title challenger Gerald Washington last July. Now the 36-year-old is back in the world title conversation.