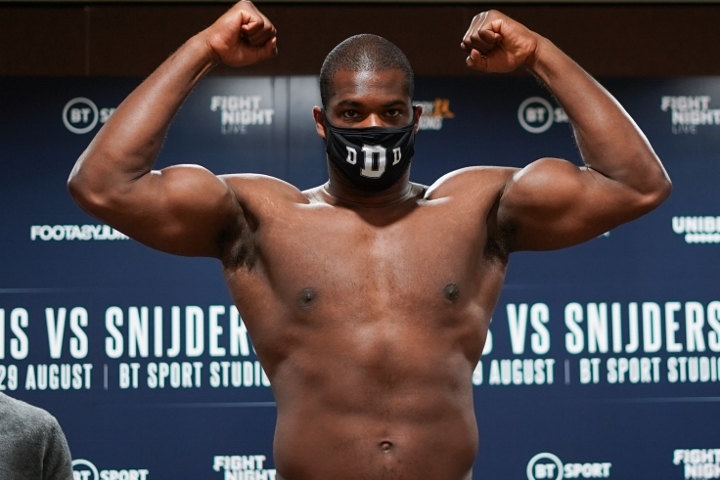 Daniel Dubois goes into the biggest fight of his career against Joe Joyce next month, but he can step up to the challenge and stop his tough opponent, continuing his excellent record.

14 of Dubois’ 15 wins have come by stoppage. Kevin Johnson is the only man to take him to 12 rounds but that is no surprise given that the American is so hard to beat inside the distance.

Dynamite has only featured once in 2020 but he looked sharp once again in a second-round success over Ricardo Snijders. Like many of Dubois’ opponents, he found his power to difficult to handle. Dubois is the 31/100 favourite in the odds on Daniel Dubois vs Joe Joyce bout betting. Those odds suggest he has an excellent chance of bringing his record up to 16-0 and taking a big step towards a world title opportunity.

Triple D will know better than anybody the challenge his fellow British opponent will bring to the ring. Joyce has had impressive victories over Bryant Jennings, Bermane Stiverne and Alexander Ustinov over the last couple of years. He also comes into this fight on the back of a win against German Michael Wallisch.

Backing Dubois in the method of victory market is probably the smartest way to bet on the man from Greenwich, London next month. He is available at 3/5 in that market, and given his record, it is the most likely outcome.

Joyce will be fully aware of Dubois’ power, however, staying away from him for 12 rounds is no easy feat. His tactics may be to counter his younger opponent which could set this up to be a fascinating clash to watch. Dubois is sure to train really hard for this fight as he knows the importance of it in his career. He will not just want the win, but also produce an impressive performance which sends a message to the best boxers in the division.

Sixth Round Could Be Best Bet in Round Betting

If it is round betting you are looking for in this fight, look for the middle rounds, with the sixth being the best choice here.

Dubois will unlikely take too many chances early into this fight. He might just use the opening three rounds to eye Joyce up before making his move. If he can throw as many punches as he has in his earlier professional contests, there is a strong chance the referee will stop this one in the middle stages.

The early rounds should also be avoided as Dubois will have a lot of respect for the Olympic silver medallist from the 2016 Games. Going in gung-ho would be an extremely dangerous approach as Joyce can hit hard himself. If you want to cover yourself further, take rounds seven and eight with smaller stakes as this will then give you a much bigger window for success.

Dubois and Joyce are set to meet on the 28th of November in London, but the venue has yet to be confirmed.