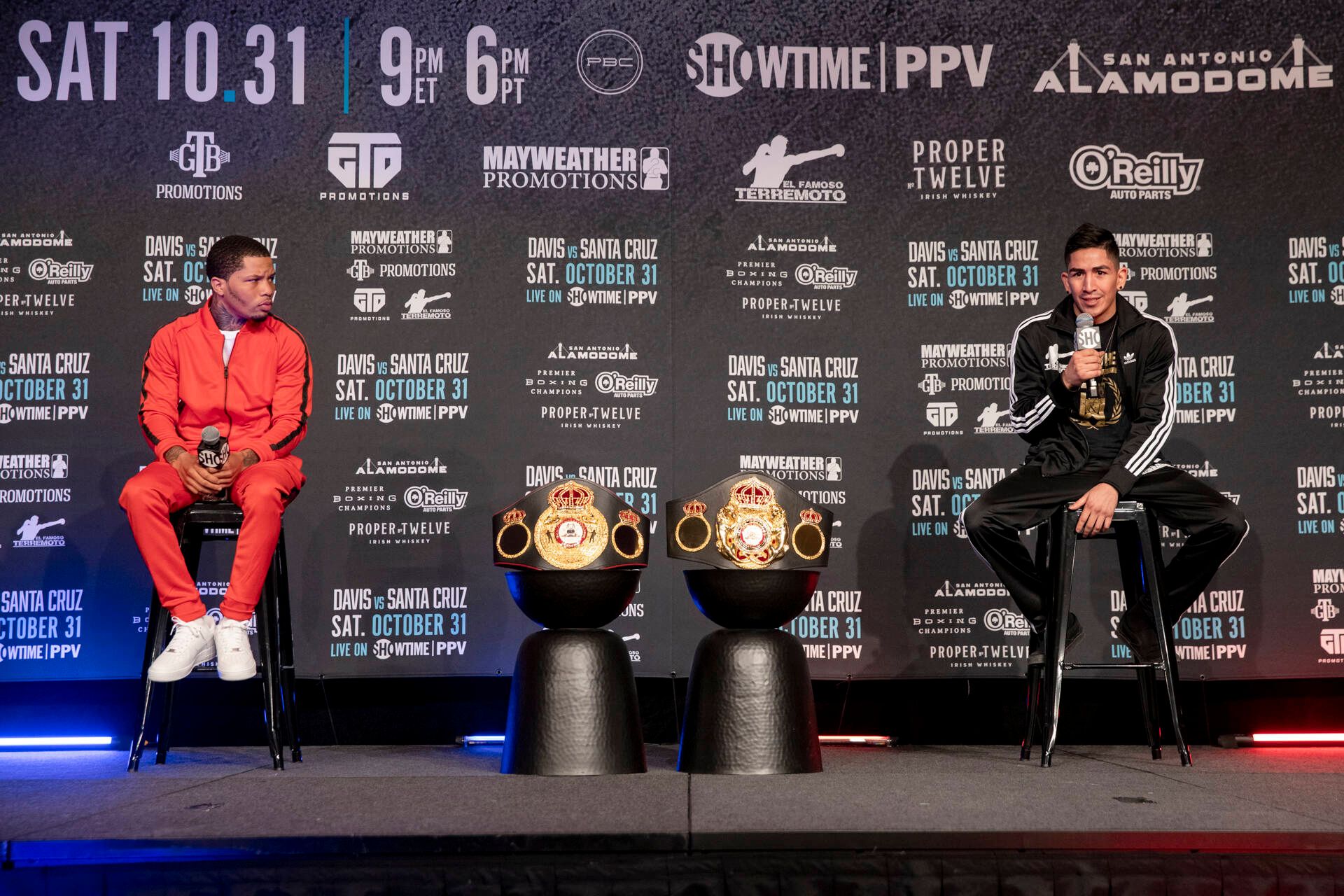 Two of the sport's most electrifying fighters, Davis and Santa Cruz will battle for the WBA Super Featherweight and WBA Lightweight Championships in a matchup that pits the prodigious power of Davis against the unrelenting pressure of Santa Cruz.

Davis vs. Santa Cruz is promoted by Mayweather Promotions, TGB Promotions, GTD Promotions and Santa Cruz Boxing Club. Tickets are on sale now and can be purchased at Ticketmaster.com. The Alamodome has implemented a comprehensive health and safety plan to protect against the spread of the coronavirus. All fans attending the event will be screened upon entry and are required to wear a mask as well as follow social distancing guidelines. Tickets will be distributed in seat blocks known as "pods" to maintain distance between groups not from the same party. For more information, visit Alamodome.com.

Here is what the press conference participants had to say Thursday:

"My team and I decided to move our camp to Las Vegas so we could have a perfect camp. We spent 15 weeks in training, so I'm well prepared. Hopefully Leo is well prepared and we give the fans what they want to see.

"We know Leo is going to come with a lot of punches and I'm going to be explosive. It's all about giving fans a treat. I'm grateful to be in this position and I'm ready. Saturday night is going to be a memorable night.

"Not to take anything from him, Yuriorkis Gamboa was just trying to survive against me. It's harder to get punches off when someone isn't trying to bring the fight. I know Leo is going to come to fight. I think this performance is going to put me up to the next level.

"Michael Jordan used to read the paper and do what they said he couldn't do. That's what I'm doing. I have to prove that I'm the baddest man in the sport on Saturday night.

"Leo is going to come to fight and it's just about me stepping up and doing what I do best. You can see the potential in a fighter from the outside, but you have to see it actually come out in a fight to believe it. That's the position I'm in. Everyone knows I'm great, I just have to show it.

"Leo has shown that he's a top tier fighter, and he's going up against an explosive, powerful fighter like myself. I think the winner should be in the top 10 of the pound-for-pound list.

"I'm one of those fighters that knows how to focus when I have something big in front of me. None of the great fighters before me have frozen up when it's crunch time. I've always been able to focus when big things are on the line. That's what I did for this training camp.

"I'm not really focused on anyone who isn't Leo Santa Cruz. I can't overlook Leo. As far as any other fighter out there, they just don't matter to me right now. I'll prove it along the way. This is one step closer to proving the point I want to prove."

"This is what I've always dreamed of. When I was a little boy, I wanted to be on this stage. I'm living that dream and I'm very happy and excited. I never thought I'd accomplish it. I thought it was like winning the lottery. But thanks to the fans, I'm here where I'm at.

"I'm facing the best fighter in the division. If you want to be the best, you have to beat the best. I have to go against the best fighter. I wanted to challenge myself. I know this is a dangerous fight for me, but I want to test myself.

"We've both suffered and been through a lot to get here. Neither of us wants to go back to where we started. So I know we're both going to give a great fight to the fans.

"I have the heart of a Mexican warrior. My dad has told me to fight a smart fight, but even though he's going to say that, there's a good chance I end up brawling with him at times. No matter what, we're going to find a way to beat him.

"Gervonta is the best opponent I've faced. He's the strongest fighter I'll have faced. The Abner Mares and Carl Frampton fights were great experience for this kind of fight. I learned a lot from those four fights and since then I've learned a lot more.

"It would mean the world to me to become a five-division champion. It would be another dream come true. I would put the Santa Cruz last name right up there with the best.

"Gervonta is a big guy and I know he's going to come hit hard. But I've trained with bigger guys all camp and I've been able to take everything thrown at me.

"The fans want you to go and make it a back and forth war. I know against Gervonta I have to fight smart. I'm going to just try as hard as I can to listen to my father's advice.

"I definitely took this fight to quiet the critics. People said I didn't want to fight the big names. So I went after the biggest challenge in the division and that's Gervonta Davis.

"I leave the opinions to the fans and media. My job is to get the win and give the fans a great fight. I'm going to give it my best and leave it all in the ring."