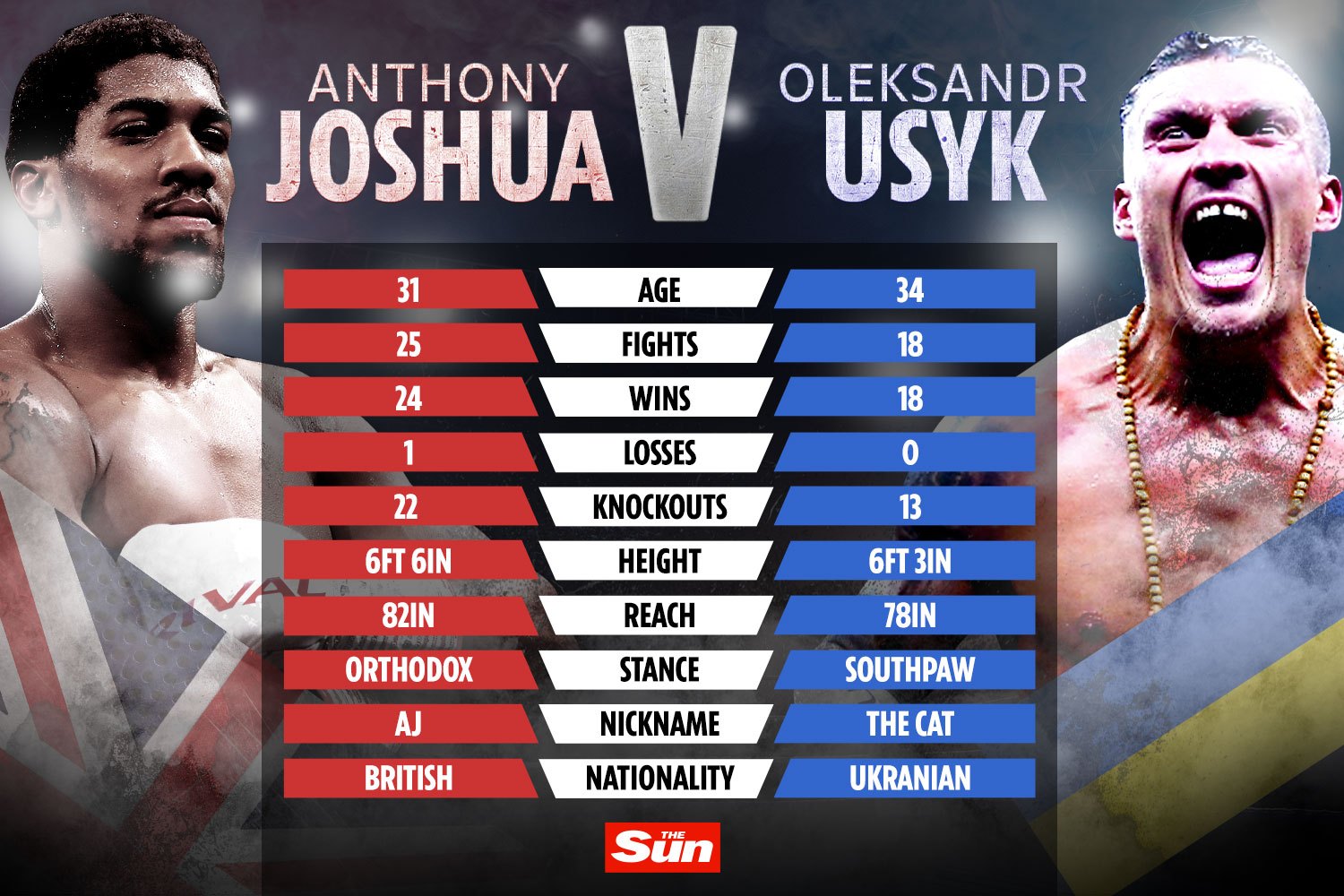 Millions of people are excited about the upcoming fight between Anthony Joshua and Oleksandr Usyk. The bout will take place on 25th of September in London, so boxing fans are going to the Tottenham Hotspur Stadium. If you are also anticipating this event, you might be interested to know more about these legendary boxers.

1. Joshua had an IBF title

In 2016, Anthony Joshua became a world heavyweight champion in his 16th fight against Charles Martin. In 2017, he claimed the WBA ‘Super’ and IBO world titles after the battle with Wladimir Klitschko at Wembley Stadium. The following year, Joshua added the WBO belt as he defeated Joseph Parker. In fact, this was the first boxer to take Anthony the full distance in a fight. In 2019, Joshua defended all of his titles in a bout with a former WBA champion Alexander Povetkin.

2. Usyk is an Olympic Gold medallist

Very few people know that Oleksandr is a veteran of two Olympic Games that took place in 2008 and 2012. The first time he got a silver medal after the defeat to Clemente Russo and the second time he managed to beat Russo in the final and earned gold. Apart from those major achievements, Usyk won gold medals at 2011 World Championships, 2008 European Championships and 2008 Strandzha Cup. He also won silver at 2008 World Cup and bronze at both 2009 World Championships and 2006 European Championships. The list of victories is incredible, isn’t it?

3. Usyk is the only boxer holding four cruiserweight titles

As you might remember, Oleksandr Usyk won the World Boxing Super Series tournament in 2018 and became the first ever four-belt cruiserweight champion. Although Jermain Taylor, Terence Crawford, Cecilia Braekhus and Bernard Hopkins have all owned such titles as WBA, WBC, IBF and WBO simultaneously, Oleksandr is the first person in history who holds the four belts solely in the cruiserweight division. This fact makes Usyk the right person to bet on at the best online casino Canada or any other casino around the globe. In 2016, he gained the WBO title in the fight against Krzysztof Glowacki. Later, he picked up the WBC title against Mairis Briedis and added the WBA and IBF titles after beating a strong opponent Murat Gassiev.

One of the biggest upsets in heavyweight history was when Joshua lost three titles in defeat to Andy Ruiz Jr. That fight in New York was a complete shock for Anthony and his fans. Can you imagine that he was sent to the canvas four times? Anthony was stopped in the seventh round by a huge outsider, so IBF, WBA and WBO titles didn’t belong to him anymore. Unfortunately, his American dream suddenly turned into a nightmare. Nobody expected this outcome since Ruiz Jr had been mocked by many for his weight and shape but still managed to gain a victory.

5. The predictions are quite contradictory

There is no single opinion on who is going to be a winner in this fight. Experts give different predictions, which is really confusing. For example, Max Kellerman believes that Usyk will win thanks to the quickness of his boxing brain. Sergey Kovalev also says that Usyk will defeat Joshua and recommends placing bets on him. In addition, Peter Fury warns Joshua’s fans and admits that Oleksandr Usyk is a very dangerous opponent. On the other hand, John Fury assumes that Usyk won't be able to hit hard enough because he’s too small. Besides, he says that AJ has a great array of boxing skills and he is generally too good for Usyk.

Anthony Joshua and Oleksandr Usyk are both outstanding athletes that can boast major achievements in their sports career. That means their fight is going to be spectacular and definitely worth watching. Hopefully, the facts mentioned above will help you to make the right bet for this boxing event.