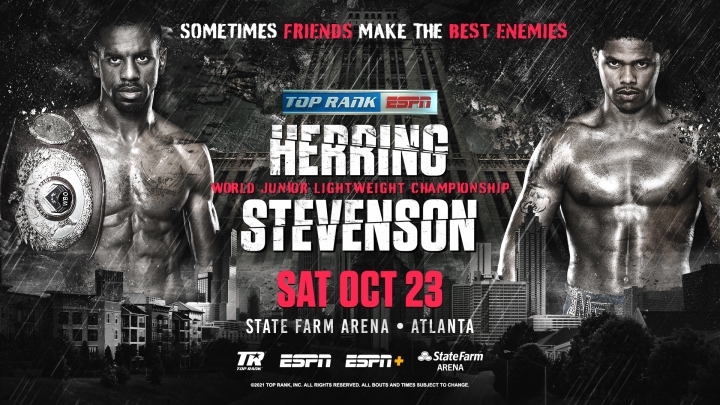 Jamel Herring will take on Shakur Stevenson, Saturday 23rd October 2021 at State Farm Arena in Georgia. The fight will take place over 12 rounds in the Super Featherweight division for the World Boxing Organisation World Super Feather Title. ESPN+ will air the event live, you can stream Herring vs Stevenson via the ESPN+ app. The fighters are expected to ringwalk at around 10:00 PM EST / 7:00 PM PST US Time and 3:00 AM BST in the UK.

Shakur Stevenson is currently (+100) to win, while (+100) on Jamel Herring. You can check out betting sites like casinoutanspelpaus.io

Jamel Herring's record is currently 23W 2L 0D 11KOS. Last time Herring fought he won by a surprising upset over UK's Carl Frampton, last April in Dubai. The fight was for their WBO World Junior Lightweight championship. Herring is currently on an 8 bout winning streak and has not lost since 2017 against Ladarius Miller. Jamel Herring is the older by 11 years, at 35 years old than Stevenson. Herring is an active fighter with boxer style. He likes to throw a lot of punches. The biggest disadvantage is his age at this point in his career.

The last time Stevenson spoke about Herring he stated, "doesn't interest him as much" because the 35 year old has "miles on his career, plus two losses to southpaws". He says "he'll happily fight and beat Herring". Well hear we are and Stevenson is being talked about in the boxing industry as the next big thing! He has built up an impressive resume defeating fighters like, Jeremia Nakathila, Toka Kahn Clary, Joet Gonzalez, and Christopher Diaz. While he is not a big puncher with a KO ratio at 50% he does have a high boxing IQ. The also has excellent ring gernalship and is a very talented boxer. He started his career in 2017, oddly enough the last time Herring lost. Since than he has built up an undefeated record of 16W 0L 8KOs 0D.

Shakur Stevenson is expect to win. Herring is past his prime and at the end of his career. Herring is the more experienced professional fighter, having had 9 more fights. However, Jamel Herring last fought 5 months ago while Shakur Stevenson's last fight was 3 months. Stevenson is younger and more active in recent years. Herring has a height advantage of 3" over Stevenson and a 2" reach advantage. This bout is for the WBO super featherweight championship of the world.

How to watch the fight?

In the US you can stream Herring vs Stevenson on ESPN+ app. This is a standalone service from regular ESPN, so you don’t need to be an existing TV subscriber. You can download the app for PC, Apple, Android, Fire TV, Roku, your Smart TV and many others.

Troy Isley from Alexandria, Virginia, USA, is expect to fight along with Antoine Cobb, from Chicago, Illinois, USA making his debut. More bouts are expected to be announced shortly.