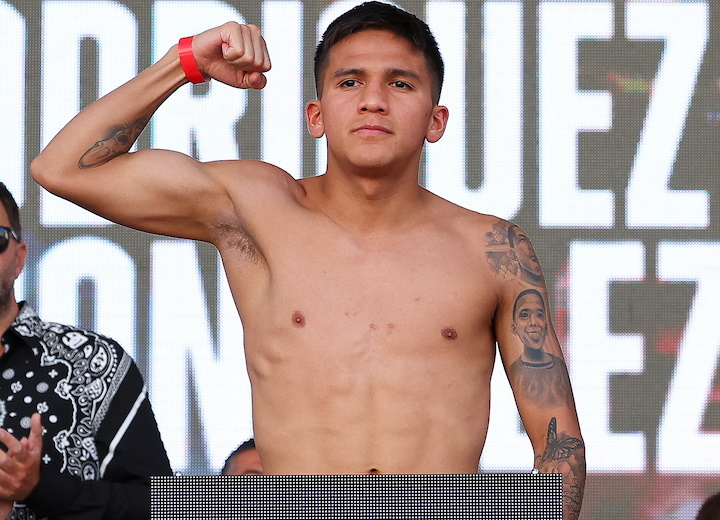 LAS VEGAS --Jesse "Bam" Rodriguez has definitely solidified his name in the 2022 Fighter of the Year conversation.

He certainly has earned the honor given his meteoric rise this year.

Rodriguez defended the WBC 115-pound belt for the second time when he soundly outpointed a game Israel Gonzalez in a 12-round unanimous decision on Saturday at T-Mobile Arena.

Rodriguez became boxing's youngest active titleholder when he won the vacant junior bantamweight title on Feb. 5 by clear decision against former titlist Carlos Cuadras whom he dropped in the third round, after moving up in weight replacing the sick Srisaket Sor Rungvisai on six days’ notice.

Rodriguez then defended the belt on June 25 in a homecoming fight in San Antonio against an 100 percent Sor Rungvisai, but it was 100 percent domination by Rodriguez, who dropped the That fighter in the seventh round before knocking him out in the eighth round in what appeared to be the most complete performance of his career to date.

Then on Saturday, Rodriguez was in a tougher matchup, but that was to be expected against Gonzalez, who also gave the legendary Roman "Chocolatito" Gonzalez a more challenging than anticipated bout in October 2020. In fact, this marked the fifth bout since then for Gonzalez (28-5-1, 11 KOs), of Mexico, who entered the Rodriguez contest having not suffered a loss in his last four contests, making him one of the more active title challengers in boxing.

Both fighters were technically sound in the first round. Rodriguez connected with the best punch of the frame, a straight left hand to the head, and Gonzalez backed up Rodriguez early in the round with a short right.

Round two was nothing but action. But with 1:10 remaining, Rodriguez nailed Gonzalez with a sharp right uppercut. However, Gonzalez didn't appear to be too bothered. Rodriguez connected with a counter jab later in the round that kept Gonzalez honest on the inside.

In round four, Professor Rodriguez (17-0, 11 KOs), of San Antonio, Texas, clicked the record button for his masterclass presentation, ripping Gonzalez with efficient bodywork and dictating the pace with an impactful southpaw jab.

The mood simmered during the middle rounds but it picked up towards the end of round seven when Rodriguez slid to his left and planted a solid left hand that backed Gonzalez into the ropes.

Time was called less than a minute into round eight after an accidental headbutt. Gonzalez was briefly examined by the ringside physician, but the inspection found no serious damage. When the fight got back underway, damage was applied by Rodriguez's powerful jab.

Time was again called with less than a minute remaining in the frame after Rodriguez connected with a low blow. Moments later, Rodriguez dropped Gonzalez with a right uppercut that landed right on the huevos, prompting referee Kenny Bayless to take a point away from the guilty party.

After recovering downstairs, Gonzalez obtained a second wind as round nine got underway. But late in round nine, Rodriguez began to sap the air out of his opponent, connecting at will, including consecutive left uppercuts to the chin, and a slew of jabs before slipping and sliding away from Gonzalez's counters.

In round 11, Rodriguez busted Gonzalez with another uppercut to the groin, sending his man down to the floor for the second time via illegal measures. However, luckily for Rodriguez, Bayless missed this latest foul.

Neither fighter pressed to knock the other out in the 12th round and it became obvious that both were on cruise control, thus the fight went to the scorecards.