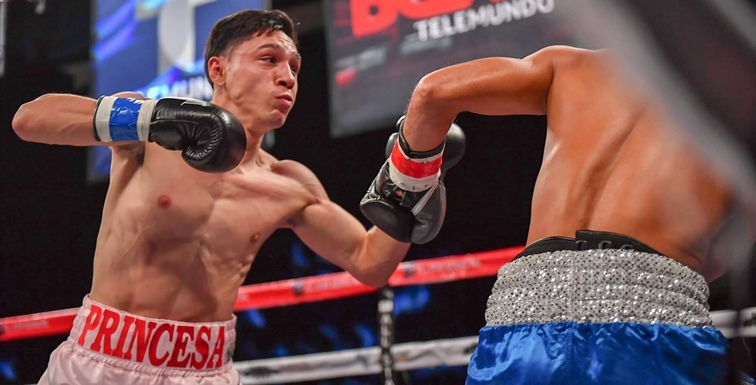 Flyweight sensation Anthony "Princesa" Olascuaga (4-0 2 KO's) will make his ring return on Friday, October 14th in Niagara Falls, NY as he defends his WBA Fedelatin flyweight title in a 10 round clash against crosstown rival Marco Sustaita (13-4-1, 11 KO's). The bout will be televised on ESPN Knockout all throughout Latin America.

Olascuaga who resides in Northeast L.A, will make his 2nd appearance on the "Seneca Fight Night" series which is promoted by Tuto Zabala's All Star Boxing, Inc. In his last outing this past May, "Princesa" took out former undefeated prospect Gustavo Perez (9-1), forcing him to retire on the stool in the 6th round.

"El Lobito" Sustaita of Oceanside, CA is eager to jump back in the ring after a confidence building win last August in Mexico. Sustaita, promoted by Paco Presents is looking to use his experience to dethrone the WBA Fedelatin Champ and earn his first regional title win with Top 15 spot In the rankings.

"We are delighted to bring back promising prospect Anthony Olascagua who together with Teiken, We continue to build a future superstar," notes All Star Boxing, Inc CEO Felix "Tuto" Zabala.

"Olascagua is on the fast track to a title shot, already regional champ at just 4 fights. He has no easy foe in Sustaita who has proven he can hang with the best and carries the edge in experience." On Friday Oct. 14th we expect another spectacular night of boxing in front of a sold out crowd." Closed Tuto Zabala

The undercard features some of the best local talent from the area, Including The Queen of Niagara Falls Mikiah Kreps, alongside Alexander Castellano, Grefferd Nagyot, Daniel DeJesus, Michael Vega, Anthony Bizzaro amongst others.