Brook-Spence Event Proving To Be A Hot Ticket 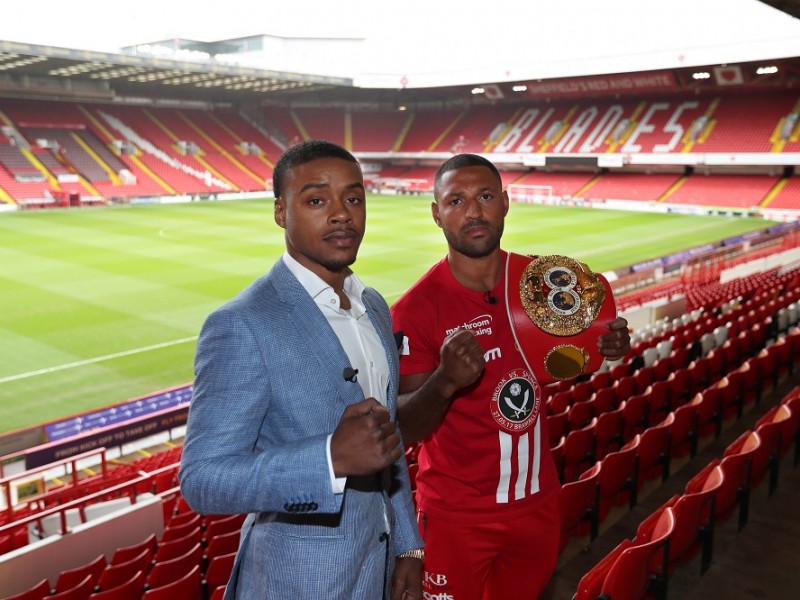 Say what you want about mandatory title fights, but the fans in the United Kingdom seem to be crazy over this one.

Tickets for the May 27 welterweight title clash between Kell Brook and Errol Spence have been officially made available to the general public on Friday, March 31. The pre-sale proved to be a smash hit, as Matchroom Boxing's 'Matchroom Fight Pass' completely sold out of tickets on Thursday for the upcoming clash, which will play to a capacity crowd at Bramall Lane, a 32,000-seat football ("soccer" to the US crowd) stadium in Brook's hometown of Sheffield, England.

Brook (36-1, 25KOs) attempts the fourth defense of the title he earned in a 12-round decision win over then-unbeaten Shawn Porter in Aug. '14. a feat which remains a career-best victory to date.

The fighting pride of Sheffield - who turns 31 just three weeks shy of fight night - didn't get to enjoy a true celebration tour, as he suffered leg wounds sustained in a knife attack while on holiday in Tenerife in Sept. '14. He enjoyed a triumphant return to the ring that following March, scoring a 4th round stoppage of Jo Jo Dan. Knockout wins over Frankie Gavin and Kevin Bizier followed, before taking a major risk as he moved up two divisions to face unbeaten, unified middleweight titlist Gennady Golovkin. The payoff was worth it only in monetary amount, but the sizable check came at a price as he suffered a damaged eye socket and the lone defeat of his career after being stopped inside of five rounds.

A hard decision was made afterward, as Brook flirted with the idea of abandoning his welterweight title in favor of a run at super welterweight. He was granted a medical exemption by the IBF to allow his injuries to heal, but in that time decided that he can squeeze down to a 147-pound frame for at least one more fight.

With that, Spence (21-0, 18KOs) will make his first boxing trip to the UK since his run on the U.S. men's boxing team during the 2012 London Olympics. The Long Island-born, Texas bred-and-based welterweight was the last man standing for a men's team that came home empty handed in its pursuit of medals, but has since proven to be the standout member in the pro ranks.

The upcoming clash with Brook will mark Spence's first shot at a major title. His path to contention included knockout wins over former 140-pound titlist Chris Algieri and one-time welterweight title challenger Leonard Bundu - each of whom had never previously been stopped before running into the gifted southpaw in 2016. Both wins appeared live on NBC, with Spence's win over Bundu producing the highest TV rating of any U.S.-based boxing event in the 21st Century, drawing more than 5 million viewers in a clash that came at the tail end of NBC's live coverage of the 2016 Rio Olympics.

The bout will air live on Sky Box Office in the United Kingdom and on Showtime in the United States as part of the network's hit "Showtime Boxing International" series.

As per the press release from Matchroom Boxing, tickets for the night are priced as follows:

Tickets then go on general sale at 10am on Friday from Sheffield United’s Box Office at http://www.sufc.co.uk/tickets/, on 0114 253 7200 and in person from the box office at Bramall Lane – all tickets purchased from Sheffield United are subject to a 10 per cent booking fee.

VIP tickets are exclusively available from Matchroom Boxing at www.matchroomboxing.com