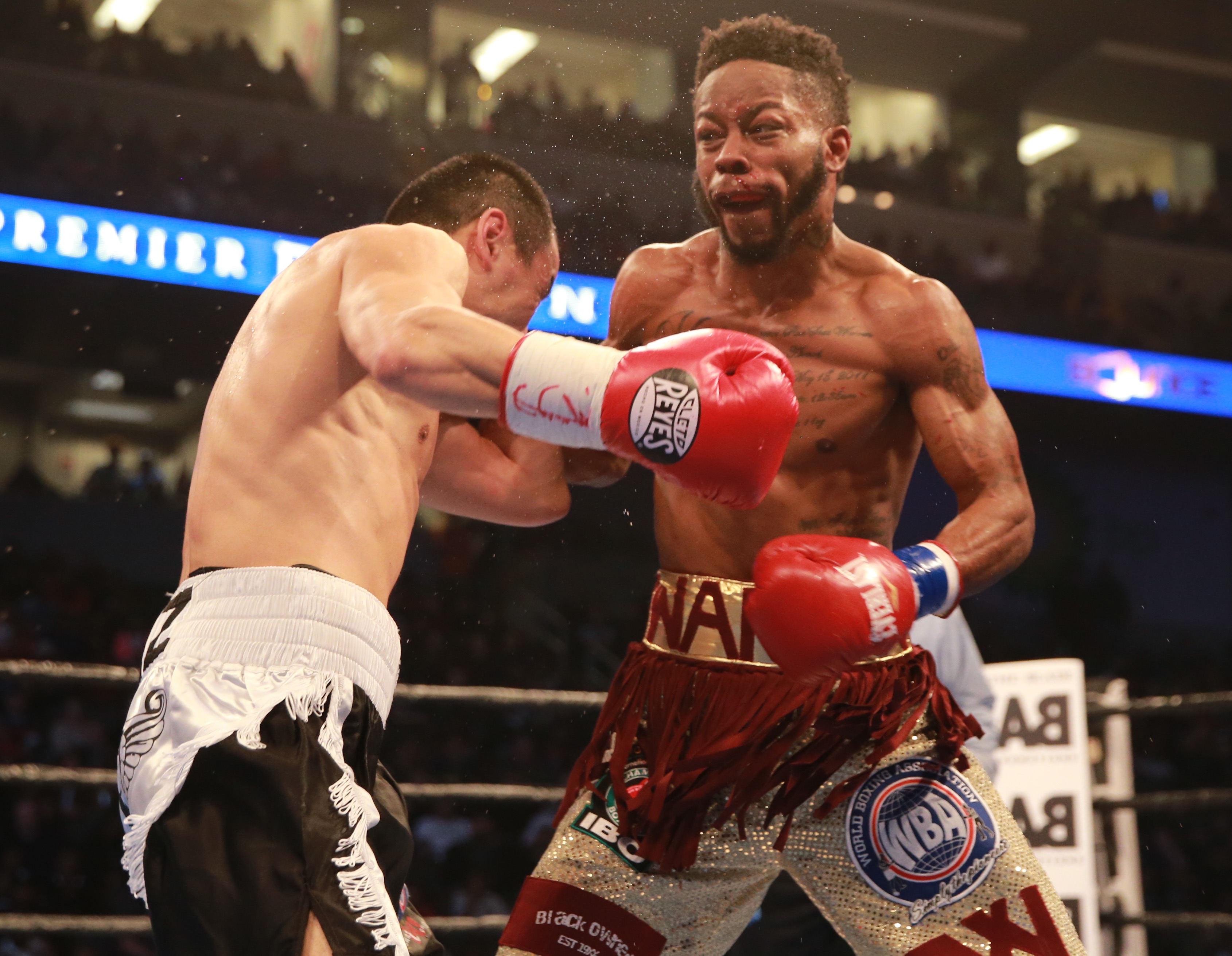 TOLEDO--Zhanat Zhakiyanov already had a tough task ahead facing defending bantamweight titlist Rau'Shee Warren in his home state. The manner in which he was able to pull off the upset and win the crowd was an even greater uphill climb, rising from two 1st round knockdowns to claim a split decision in their 12-round thriller Friday evening at Huntington Center in Toledo, Ohio.

For the first three minutes of the bout - which aired live in the second leg of a PBC on Bounce tripleheader - Warren looked to be the most complete boxer in the world. The diminutive southpaw showed blazing hand speed, brilliant defense and stepped up his game in terms of his underrated punching power. The latter produced early drama - and a world of pain for Zhakiyanov who found himself on the canvas midway through round one and again mere moments later.

In moments of adversity. a boxer can only remain as calm and composed as those around him. Manning his corner, promoter and former two-division world champion Ricky Hatton made sure to remind Zhakiyanov of what Warren was able to do and how to properly adjust.

"We know Rau'Shee was the quicker fighter, the better boxer and was going to win a fight as long as Zhanat would only try to match him punch for punch," an elated Hatton - whose promotional company now has its first world champion - told FightNights.com after the bout. "I told him to get in there, mug him, get in his chest and bang away at his body before coming back upstairs.

It took for Zhakiyanov to fall behind 20-17 on all three cards before making said adjustments, but completely turned around the fight once he implemented the sage advice. Warren's hand speed was no longer a factor, in part because he stopped jabbing but also due to Zhakiyanov successfully cutting off the ring and shortening the distance on his punches.

From there came a fan-friendly slugfest that proved difficult for the judges to score. The three ringside officials were split on five of the final nine rounds, thus producing a wide variance in the final scores.

While the fight itself was memorable, the officiating for the bout was a different story. Referee Gary Rosato missed what should have been two knockdown calls for Zhakiyanov, insisting on both occasions that a push caused Warren to fall to the canvas. The third man also had a strange habit of shoving the diminutive boxers away from one another in lieu of merely separating the two on any called break in the action.

Once the fight crossed the finish line, the three judges assigned seemed uncertain in what just took place. Larry Hazzard somehow had Warren winning 115-111 despite the perception that the lone three-time U.S. Olympic boxer in history had lost the majority of the rounds past the opening two.

On the extreme opposite side of the equation, judges John Stewart and Brian Kennedy scored it 115-111 and 116-110, respectively, in favor of Zhakiyanov, who swept rounds 3-12 on the latter scorecard.

"I knew I won the fight but wasn't sure about getting the decision since it was his home (state)," Zhakiyanov told FightNights.com through an interpreter after the fight. "So we were surprised but in a good way when the judges saw what we felt took place."

As noted by Hatton, it was the type of fight where the losing combatant would believe he was wronged. Such was exactly the mindset carried by a heartbroken Warren afterward.

"Man, I won that fight," Warren insisted after the bout. "I knocked him down, I was landing the cleaner punches and making him miss. What it is, the judges are favoring aggressive fighters, even when they ain't even landing.

It was a similar feeling when he dropped a hotly contested split decision to then-unbeaten titlist Juan Carlos Payano in Aug. '15. Warren convinced the judges in their rematch last June in becoming the first member of the 2012 U.S. Olympic boxing team to win a world title.

He has now lost two of his last three starts, but hopes to have the opportunity to reclaim his prize.

"No doubt I want that rematch," Warren insisted. "I beat him (on Friday) and I'll beat him again."