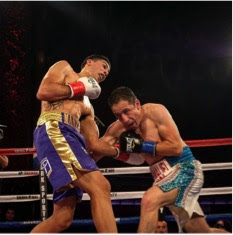 It was a step up in class for Roberto Manzanarez, but the rising super lightweight barely broke stride in stopping Gamaliel Diaz in four rounds Friday evening at the Belasco Theater in Los Angeles, California.

In addition to the upgraded competition level, the 22-year old prospect from Los Mochis, Mexico by way of Phoenix, Arizona was also fighting for the first time in the United States. He made an immediate impression on the capacity crowd, as well as viewers and ultimately on Diaz.

While having seen much better days in his career, Diaz was still hopeful that the night would help turn back the clock. The former super featherweight titlist hasn’t won a contest versus an opponent with a winning record since upsetting then-130 lb. beltholder Takahiro Ao in 2012, but has managed to go the distance with stiff competition in recent times.

An impressive list that includes Anthony Crolla (who has since won a world title), Tevin Farmer and Petr Petrov were unable to put away the faded Mexican slugger in their respective performances, but Manzanarez was able to change that dynamic in a hurry.

Diaz never had a chance to get untracked, as his opponent 14 years his junior forced a torrid pace early in the bout. The points were racking up on the scorecards, but the matter was taken out of the judges’ hands with a single body shot in round four. Diaz (40-16-3, 19KOs) was down and out, never threatening to beat referee Raul Caiz Sr’s ten-count.

The official time was 2:23 of round four.

“I am very happy with this win, and I'm glad I stopped him early,” Manzanarez (34-1, 28KOs) said after the biggest win his pro career.

The seven-year ring veteran would be considered a bit deep into his pro journey to still carry a prospect tag. Having begun at age 15, though, means quite a bit of learning on the job – something he continues to do with each bout, even one that produced his greatest in-ring achievement to date.

“I know I have to go back into the gym to work on everything, and I need to be in better form physically and mentally,” Manzanarez admitted afterward. “There's a big difference between fighting in the U.S. and in Mexico, fighting here was a dream come true of mine, and I hope I get more opportunities to do so.”

Also on the televised portion of the show:

Genaro Gamez (4-0, 3 KOs) was forced to go the distance for the first time in his young career, but did so in dominant fashion in pitching a six-round shutout over Alejandro Ochoa (7-13-2, 1 KO). Scores were 60-54 across the board for Gamez, the 21-year old from San Diego who had never fought beyond the first round in his young career prior to Friday evening;

Luis Feliciano (1-0) enjoyed a successful pro debut in scoring a four-round unanimous decision over Angel Rodriguez (5-8-3, 4 KOs). Scores were 60-54 (twice) and 59-55 in favor of Feliciano, a 23-year old super lightweight from Milwaukee, Wisconsin;

Former amateur standout Javier Martinez (1-0) from Dallas, Texas marched straight into the lion’s den in his pro debut, but ultimately prevailed in stopping Mexico’s Miguel Barajas (2-2, 1KO) in the 5th round of their scheduled six-round super featherweight heat;

Jousce Gonzalez (4-0, 4 KOs) remained a knockout every time, the latest conquest coming in the form of a 1st round stoppage of Mexico’s Emmanuel "Pollo" Valadez (3-3, 3 KOs). Gonzalez decked Valadez – who has either won or lost all six career bouts by knockout – in the opening seconds of the contest, applying non-stop pressure until forcing the end at 2:42 of round one.