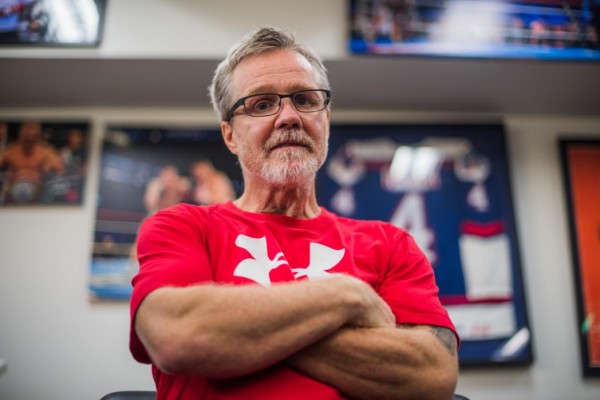 After having spent the heart of his prime learning from one of boxing's very best trainers, Scott Quigg has decided the time has come to pick the brain of yet another top shelf instructor.

The former super bantamweight champion announced on Monday his intention to begin training camp with renowned Hall of Fame cornerman Freddie Roach. The move comes after the surprise revelation of his parting ways with veteran coach Joe Gallagher.

"After six years of working together, I announce my departure from Joe Gallagher," Quigg said in a statement released through the press office of Matchroom Boxing. "We have been a great team...have achieved a lot and had some great wins together."

Quigg (31-1-2, 24KOs) flourished under Gallagher's guidance, quickly transitioning from a rising prospect to one of the best super bantamweights in the world. His rise to fame began with a 6th round knockout of working class hero Rendall Munroe in their Nov. '12 rematch to win a secondary title at 122-pounds.

His title reign lasted more than three years, grabbing the attention of his divisional peers with an impressive 2nd round knockout of former champ Kiko Martinez in July '15. The win came on the same day that his longtime rival, Belfast's Carl Frampton showed signs of vulnerability, as he was dropped twice early before gathering himself to outpoint the late Alejandro Gonzalez Jr in his US debut.

The aforementioned victories helped set up their long awaited grudge match, a super bantamweight title unification clash which came last February in front of a standing room only crowd at the Manchester arena in Manchester England. The event was a commercial success, but unfortunately a largely dull affair in the ring as Quigg suffered a broken jaw and his rally coming too late to avoid a split decision defeat for the lone loss of his career to date.

Frampton parlayed the victory with a featherweight-title lifting effort over Leo Santa Cruz last July to earn honors as 2016 Fighter of the Year. Meanwhile, Quaid spent most of the rest of the year healing up before returning last December. He stormed back in a big way, knocking out Jose Cayetano in the 9th round of his featherweight debut.

Along with the new weight can a trip to the United States which ultimately swayed his decision to go with Roach.<.p>

"Over the past few weeks I've been in America training," Quigg revealed. "I'm delighted to announce that I will be basing myself at the Wild Card Gym in Los Angeles and working under the guidance of Freddie Roach."

In a strange twist of fate, Quigg's vision of capturing a featherweight crown could very well come against Frampton's lone conqueror. Santa Cruz reclaimed the featherweight crown with a hard fought win in their rematch this past January in Las Vegas.

Avenging the lone loss of his career would be ubdoubtedly sweet. For now, though, Quigg prefers to tend to new business and with fresh eyes watching over him.

"I moved up to featherweight with the intention of becoming a two-divsion world champion and believe I need a fresh challenge to help me grow," Quigg states."

Roach's impeccable resume is it's nearly unrivaled in today's game. Chief among his top clients, of course, or a pair of future Hall of Famers in Manny Pacquiao and Miguel Cotto, both of whom are in the twilight of their respective careers.

Given that, preparing between Quigg and Roach makes all the more sense in present day. Sadly it comes at the expense of leaving some terrific memories in the past.

"I'd like to thank Joe for everything he's done for me; he's a terrific coach and friend, (the latter) which we will remain," said Quigg. "Our first fight together was for the British title (a 7th round knockout of Jason Booth in 2011) and we went to become a world champion.

"For that I will be forever grateful. I wish Joe and all the lads evey success in the future."

The next date, location and stakes for Quigg's next ring appearance are forthcoming.