Canelo, Chavez Jr. Meet The Press (And Thousands Of Fans, Too) 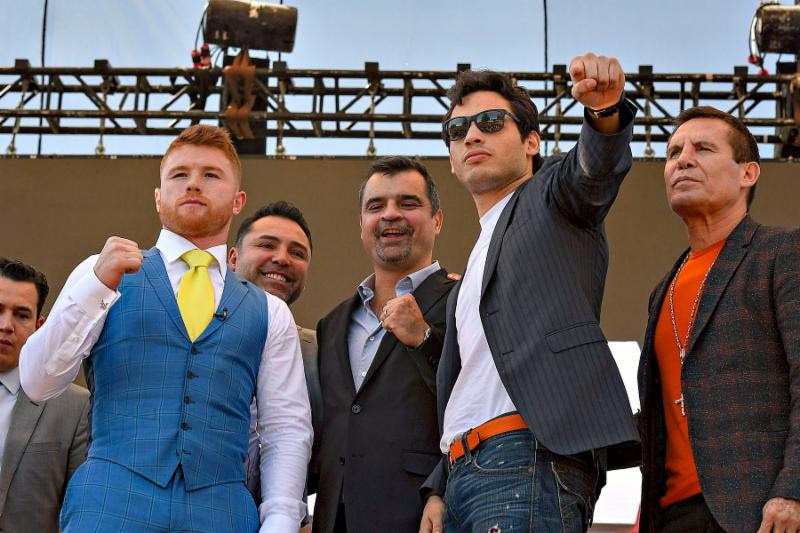 If the showdown between Saul 'Canelo' Alvarez and Julio Cesar Chavez Jr. feels like little more than a massive money grab opportunity, word apparently didn't make its way to Mexico.

Even beyond the hundreds of media members covering the event were thousands of fans in Mexico City for the first day of the four-city press tour to promote the aforementioned clash, which takes place May 6 at T-Mobile Arena in Las Vegas, Nevada. The HBO Pay-Per-View headliner - which will be contested at a catchweight of 165 lbs. - will be promoted in a similar format in New York City, Houston and Los Angeles in the coming days.

First up, though, was the opportunity for two of Mexico's most iconic figures of this generation to shake hands with the adoring public. The event was well-celebrated, with an overwhelming sense of pride to be found among all participants.

"I think that a rivalry does exist, and we are both polemic fighters," Alvarez (48-1-1, 34KOs) said of the upcoming attraction. "There have been a lot of comments directed towards me and my character, and I fight for pride to represent my country."

The latter statement is a clear response to public outcry over his continuing to move sideways regarding a desired clash with unbeaten, unified middleweight titlist Gennady Golovkin. The two were due to fight after Alvarez dethroned Miguel Cotto to win the World (lineal) and WBC middleweight crown, but the red-headed superstar instead opted for a voluntary defense first versus Amir Khan, whom he knocked out cold in six rounds in their 155 lb. catchweight bout last May.

Post-fight commentary included his insistence of facing Golovkin next, only for Alvarez to vacate his middleweight title and drop down one pound to the official super welterweight limit. There, he reclaimed a portion of the divisional crown, stopping England's Liam Smith in nine rounds to ignite a second title reign at the weight.

He has yet to defend the title and likely never will. Obviously he first has to get past Chavez Jr., but the promise made by Alvarez and promoter Oscar de la Hoya was that a Sept . '17 showdown with Golovkin absolutely had to happen. That would mean a formal move to the full middleweight limit, as Golovkin seems disinterested in negotiating any more catchweight scenarios.

Despite previous claims of having to grow into a full middleweight uniform, Alvarez opted to leapfrog the division altogether in pursuing an in-country rivalry matchup more than five years in the making. It meant giving away a lot in natural size, although a risk for which he has already begun preparation.

"It's a new weight, so I have started to spar with heavier partners, which everyone will notice come fight night," Alvarez insists. "Fights between Mexicans are usually the biggest, and I want this fight to be a mark on the legacy that many fights like this have left behind in Mexico's fight history.

It's not just history but also personal pride and changing public perception that's at stake for Chavez Jr. (50-2-1, 32KOs). The second-generation boxer always had a long road ahead from the moment he decided to turn pro, being the son of perhaps the greatest-ever boxer from Mexico that it his Hall-of-Fame father, former three-division champ Julio Cesar Chavez Sr.

Perhaps nobody ever expected the son to ever live up to his father's achievements. At the very least, however, there has been the demand for at least self-respect, as Chavez Jr. has come across as a spoiled entity who has never taken his own career seriously. Eating his way out of weight classes, failed drug tests and a reputation for not giving even a half-hearted effort in training camp will do that to a man.

To his credit, the former middleweight titlist recognizes that - despite previously insisting that he will get it right the next time around - eventually comes the day when you run out of chances at redemption.

"I've been making my way to this fight. My last fight was at 168 pounds," points out Chavez Jr, who outpointed super middleweight contender Dominick Britsch last December. "This fight isn't going to be any different from any other fight that I have had in the past. I want to thank all the people who have come to support me over the years.

"This is going to be a tough fight. Every fight is important, and this one especially because it is between two Mexicans fighting each other for the glory. The fight could not have come at a more perfect timing - both my and Canelo's names are known throughout the world as some of the best fighters. My two losses against Martinez and Fonfara taught me more than all 50 of my wins. This fight has the potential to open many doors to my future that might have been closed before."

More than anything else, it also offers the opportunity for Chavez Jr. to finally prove he's willing to fight for the people.

"I fight for pride - everyone says that Canelo is the best," notes Chavez Jr. "With Nacho Beristain in my corner, I have a lot of knowledge on my side. It's symbolic because he has his name etched as one of the greats, and this is a tribute to him and is a contribution to Mexican boxing.

"Canelo isn't Oscar De La Hoya's son (alluding to his own boxing genes). I've got a great corner. I am going to win this fight."