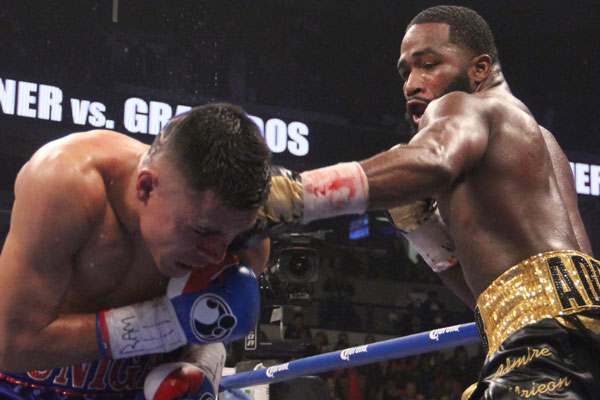 It has almost always turned out to be the case whenever Adrien Broner tops a televised boxing event. His latest adventure may have been a struggle in the ring, but his hard-fought point win over Adrian Granados was certainly a hit with viewers. The February 18 welterweight pulled in a two-year high for American cable outlet Showtime, drawing 779,000 viewers over the course of their 10-round bout live from the Cintas Center on Xavier University campus in Cincinnati, Ohio.

The telecast peaked at 859,000 viewers, with both tallies coming courtesy of Nielsen Media Research. Both numbers are network highs for Showtime Championship Boxing since Jan. '15, when Deontay Wilder's title winning effort over Bermane Stiverne produced the last million-plus viewership pull for the pay-cable channel.

Broner's ratings pull is impressive on a number of levels. Aside from it serving as the most-watched cable boxing match of 2017 to date, the viewership total doesn't even account for the number of nonsubscribers who tuned in as part of Showtime' free-preview weekend, or those who watched the Twitter live stream, the first time ever that a boxing event was simulcast live on the popular social media outlet.

Additionally, Broner still managed to draw a crowd despite a large portion of the Showtime-televised tripleheader going head-to-head with the NBA All-Star weekend festivities on TNT, with its rating north of 5.6 million going well above the network average for the time slot.

It's also nearly double the size of the audience which Broner drew for his previous Showtime appearance, with an abysmal 400,000 viewers catching his vacant super lightweight title-winning 12th round knockout of Khabib Allakhverdiev in Oct. '15. That bout also took place in Broner's Cincinnati hometown, though not even close to selling out the U.S. Bank Arena, nor managing to pull ahead of a competing boxing event on HBO that evening, as Viktor Postol's knockout win over Lucas Matthysse enjoyed a 65% larger audience (although a rating's night to forget for both networks.

The bout marked Broner's first ring appearance since a stoppage win over Ashley Theophane last April in Washington, D.C. He entered the night amidst a sea of controversy, with a warrant out for his arrest for an incident that allegedly took place in Cincinnati (the case was later dismissed) and also missing weight and having to vacate his super lightweight title.

Still, his brash personality resonated with Spike TV viewers, drawing more than 1 million viewers in producing the most-watched boxing event ever on the network as part of it's Premier Boxing Champions (PBC) on Spike TV series.

Ten months later, absent only made the heart grow fonder.

Also on the show, Lamont Peterson claimed a secondary welterweight title with a 12-round unanimous decision over David Avanesyan. Their bout averaged 479,000 viewers. Opening the telecast, unbeaten light heavyweight Marcus Browne was fortunate to have not been disqualified for a blatant 2nd round foul en route to a 6th round knockout of veteran contender Thomas Williams. Their televised-curtain raiser averaged 386,000 viewers. Peak viewership totals were not available for either match as this goes to publish.