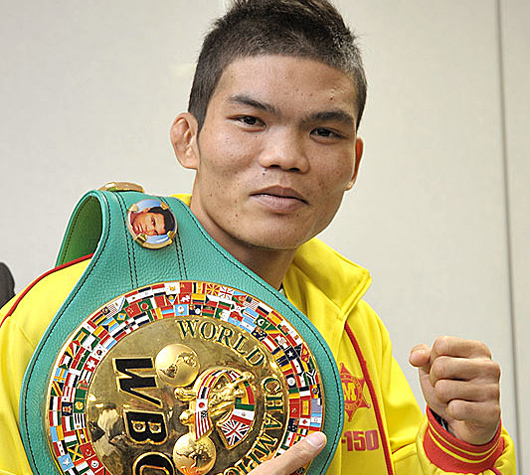 Without even a fight scheduled in the near future, Suriyan Sor Rungvisai's future is suddenly in jeopardy.

The former super flyweight titlist and current World Boxing Council (WBC) top-rated bantamweight contender from Thailand was caught with two controlled substances in his system - methamphetamines and amphetamines - during a recent random drug test, the sanctioning body revealed on Wednesday. Testing was administered by Voluntary through the Clean Boxing Program (CBP), a mandatory requirement for all WBC-ranked boxers.

"The WBC has been notified by VADA of an adverse result from WBC # 1 bantamweight contender Suriyan Sor Rungvisai from Thailand from an unannounced collation performed in Thailand - Metamphetamines and Amphetamine,"WBC President Mauricio Sulaiman told FightNights.com on Wednesday. "The fighter and his representatives have been notified and the CBP protocol will follow with further information to be released by the WBC in the near future."

The substances found in Sor Rungvisai's system are hard narcotics in the traditional street sense. As prescribed, they are used to treat Attention Deficit Hyperactivity Disorder (ADHD), narcolepsy and obesity. The latter lends to the suggestion of boxers using said drugs as means to cut weight, although there is no such evidence in this case.

That said, Sor Rungvisai (48-7-1, 24KOs) was due to take a stay-busy fight versus a yet-to-be-announced opponent on March 4 in Thailand. Assuming he escaped unscathed, the 27-year old Thai boxer was due to negotiate terms for a final eliminator for the right to face longtime champ Shinsuke Yamanaka. Such a scenario would present a chance at redemption for the former champ, who dropped a 12-round decision to the Japanase southpaw in Oct. '14.

Long before that, Sor Rungvisai briefly served as a super flyweight titlist, winning the belt in his second shot at championship glory. He came oh-so close to dethroning then-World (lineal) flyweight champion and future Hall of Fame countryman Pongsaklek Wonjongkam in 2010, before moving up in weight where he outpointed Tomas Rojas in Aug. '11

One successful defense followed - a points win over former champ Nobuo Nashiro - before losing the crown to Japan's Yota Sato in March '12.

His most recent attempt at returning to the bantamweight title picture resulted in a 12-round points loss to former champ Anselmo Moreno last March. He has since rebounded with a pair of wins over pedestrian opposition, including a points victory in a regional title fight last December in Thailand.

At present moment, the WBC has yet to speak to whether Sor Rungvisai's due March 4 appearance was in jeopardy or how the current findings will affect his #1 ranking. Should he be removed from the mix due to suspension, Mexico's Luis Nery will likely become the new number-one contender.