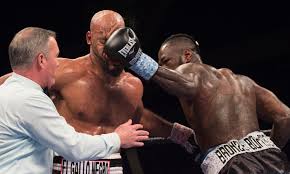 Deontay Wilder continues to rack up knockouts at every turn - except in the ratings department.

Final numbers for the unbeaten heavyweight titlist's 5th round knockout of Gerald Washington on February 25 aren't due until Tuesday morning. However, preliminary forecasts had the 2017 debut of Premier Boxing Champions (PBC) on Fox TV ranking last among the four major free-TV networks. Early round numbers indicate that 1.882 million viewers tuned in for Wilder's fifth title defense, which took place at the Legacy Arena in Birmingham, Alabama, less than an hour from his Tuscaloosa hometown.

On the favorable side, such numbers tend to trend upwards from overnight to final ratings. It was the case for his last fight, when Wilder's knockout victory over Chris Arreola initially clocked in at 1.57 million, only to enjoy a significant spike to 1.79 million and peaking at 2.54 million viewers.

Still, it was the least watched event on a sports-heavy Saturday evening on free-TV. More than two million viewers tuned in both for NBC's live coverage of a National Hockey League (NHL) game between the Philadelphia Flyers and Pittsburgh Penguins and the National Basketball Association's (NBA) edition of 'Saturday Night Primetime on ABC' featuring the Clevleand Cavaliers and Chicago Bulls. Winning the evening was a non-sporting telecast, as CBS performed above average for episodes of its TV series Ransom and 48 Hours.

Saturday night marked the third time that Wilder (38-0, 37KOs) has appeared live in primetime on free-to-air TV. Aside from the knockout wins over Arreola and Washington, the now-31 year old drew 2.365 million viewers for his late-round stoppage of France's Johann Duhaupas in their Sept. '15 headliner on NBC. All three bouts were staged at the Legacy Arena, with Wilder-Arreola drawing the highest-grossing live gate of the trio.

The bout was Wilder's first since suffering a biceps tear and hand injury in last July's win over Arreola. In Washington, he faced a late substitute, as the previously unbeaten Californian - a former tight end and defensive end during his college football years at USC - stepped in on short notice after originally scheduled Andrzej Wawrzyk tested positive for a banned substance.

It could in part explain Wilder's slow start and early troubles, as most observers had Washington no worse than dead-even with the defending titlist at the time of the stoppage. It proved moot once Wilder was able to floor his 6'7" foe and eventually finish him off, but his performance left quite a bit to be desired.

So too will likely be the case once final numbers are in for his latest primetime appearance.