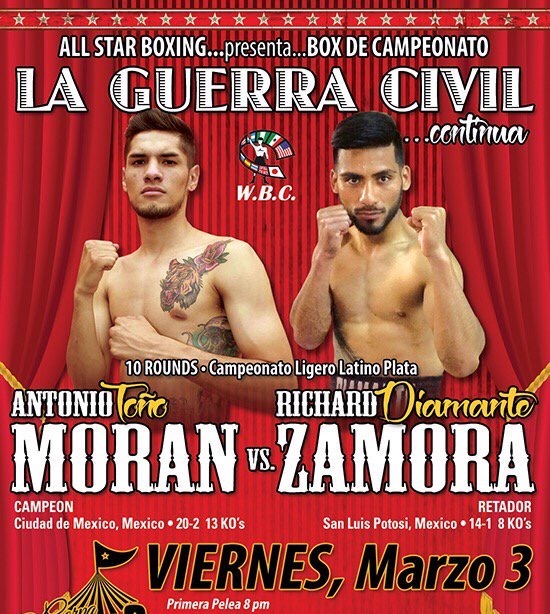 After an Olympic-sized 2017 season premiere a week ago, Boxeo Telemundo returns to its root with a Mexican civil war in store this weekend.

The first of back-to-back Mexico City shows takes place this Friday at the brand new Carpa Astros Arena. Headlining the card, local lightweight Antonio Moran hopes to return to the win column but enters a dangerous assignment in facing Richard Zamora in a 10-round regional lightweight title fight.

"Last week's show was an honor to promote," All-Star Boxing head Felix 'Tutico' Zabala Jr. told FightNights.com. "El Meserito (Ricardo Rodriguez) picked up a huge knockout win (stopping previously unbeaten Carlos Narvaez) and we got a good look at Olympians Teofimo Lopez and Antonio Vargas. All three will be back on the series.

"This week we go back to La Guerra Civil ("The Civil War") theme, which remains a big hit over here. We are particularly excited about introducing a new location (Carpa Astros) to ticket holders and home viewers."

Moran (20-2, 13KOs) appeared to be one more win in 2016 from making a run at the contender level. Unfortunately for the rangy lightweight, his last opponent - Emanuel Lopez forgot to read the script as he pulled off an upset split decision win.

Zamora (14-1, 8KOs) has been red-hot since a knockout loss early in his career. The San Luis Potosi native comes in carrying an 11-fight win streak. Most recently, he beat Jacobo Montes in a technical decision