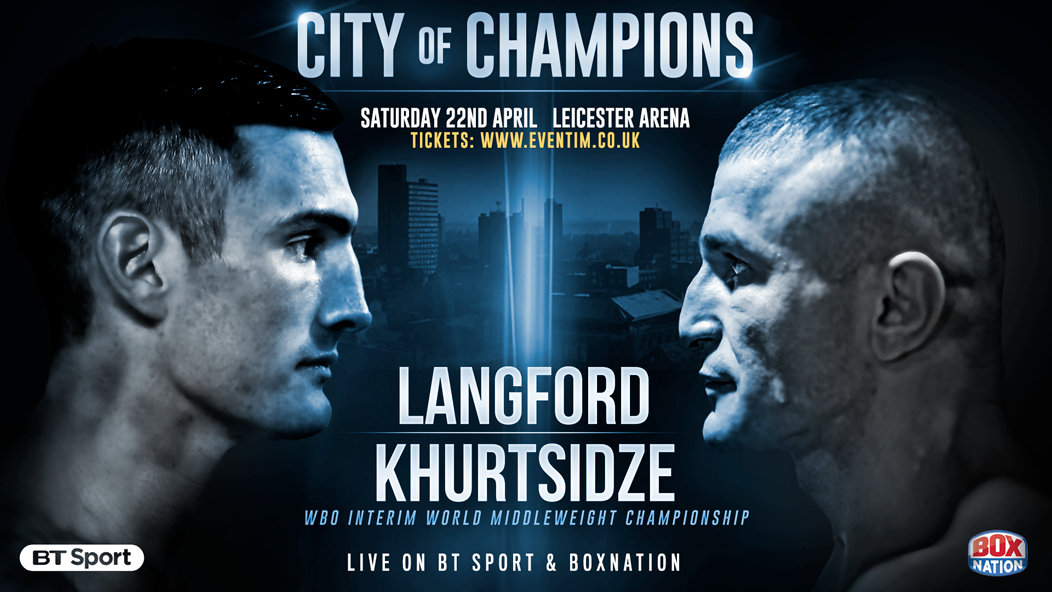 Undefeated Langford - from Birmingham, England - holds the British, Commonwealth and WBO Inter-Continental Middleweight belts and is determined to announce himself on the world stage by adding the WBO Interim title to his growing collection.

“This is massive for me,” said Langford. “It’s a huge fight and a huge opportunity to propel my name to the top of the sport. It’s a proper fight for a proper belt and I’m chuffed that Frank keeps on delivering these opportunities for me.

“This is a tough fight but it’s very winnable. I’ve got the style to beat him and if I perform to the best of my ability on the night I’ll become an Interim World Champion. He’s like a little Mike Tyson in the way he fights, he tries to bully his opponents up close and is very relentless but he can be outboxed.

“He’s been outboxed before and that’s how I’m going to beat him. I need to stick to my boxing and make sure I’m as fit as I can be. He’s number one and I’m number three, if I come through this it’ll put me on another level.”

Experienced danger man Khurtsidze has won his last nine fights since dropping a decision to Hassan N’Dam in 2010. He was last in action in March 2016 when he came in on late notice and upset previously unbeaten Middleweight contender Antoine Douglas with a thoroughly dominating 10th-round TKO.

The 37-year-old bulldozer is as mean and relentless as they come, boasting an impressive 21 knockouts from 32 career wins. After a frustrating spell on the sidelines, Khurtsidze is promising to spoil the party and put a spanner in Langford's plans.

He said: "I am looking forward to April 22 and beating Langford in front of all of his fans. I know he'll be looking to run from me all night and to steal a decision but I'm coming for the knockout . I am coming to crack bones that night."

Promoter Frank Warren said: "Khurtsidze will be the toughest opponent of Tommy's career but I know he has the tools to beat him. He's the local hero and will have thousands of his fanatical fans pushing him on to victory. Tommy has a brilliant trainer in Tom Chaney, who I'm sure will come up with a winning game-plan. If Tommy comes through this there will be some huge nights for him down the line."

Promoter Lou DiBella said: "Avtandil Khurtsidze is one of the most exciting fighters in the world and has gone overlooked by the boxing establishment for too long. That will change after he beats Tommy Langford and is able to hoist a championship.  Don’t let age fool you. Khurtsidze is fresh, he is hungry, and his story has just begun to be written. I want to thank my friend Frank Warren and his staff for making this deal so easy and for the WBO for recognizing Khurtsidze’s considerable talent."