Antonio Moran Ices Richard Zamora In One Round 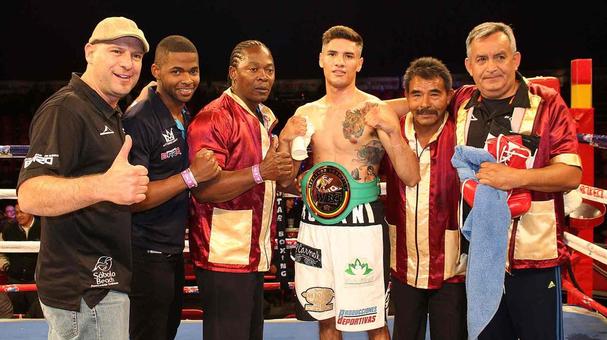 It's safe to say Antonio 'Tono' Moran is back to his winning ways.

The Telemundo-televised headliner was believed to be a dangerous crossroads fight as Moran was coming on the heels of a tough loss while Zamora was riding a lengthy win streak heading into the night. Once the opening bell rang, Moran was back to his old ways which meant the fight was never going to be competitive.

Trading in his flowing locks for a fresh fade, the baby-faced lightweight - who was fighting just above the limit - wasted no time in forcing a firefight with his countryman. Zamora took the bait and left himself wide open for the money shot which ultimately ended the fight. Moran launched a compact counter right hand just as Zamora was coming in to throw a power shot of his own, the force of the blow immediately dropping him face first to the canvas.

A desperate effort was made by Zamora to rise to his feet and steady himself, but couldn't quite get there as the referee called for a halt to the contest The official time was 1:33 of round one.

Moran improves to 21-2 (14KOs) with the win, moving past a hard-fought split decision defeat to Emanuel Lopez last December. The quick ending produced his 6th career 1st round knockout, which also ends an 11-fight win streak for Zamora (14-2, 8KOs).

The chief support was the longest of the evening, as super featherweight prospect Omar Salano forced a 7th round stoppage of Ismael Urieta in their blood soaked affair. The hard-fought battle was halted in the closing seconds of round seven, when Urieta (10-5-1, 6KOs) was deemed unfit to continue due to a gushing cut over his right eye and a potentially broken nose that wouldn't stop bleeding.

Solano (7-1, 2KOs) continues to roll on, having won seven in a row since falling short in his pro debut four years ago. The bout was his longest affair to date, also having fought in his first scheduled eight-rounder.

Kevin Salgado (3-1, 2KOs) gave Moran a run for his money in the Knockout of the Night category, scoring a highlight reel 4th round stoppage of debutant Jorge Velasco (0-1). The super welterweight affair came to an end courtesy of a picture perfect left hook on the inside by Salgado, who celebrated with a mid-ring pelvic thrust after Velasco was unable to recover from the knockdown blow.

All three bouts aired on Telemundo as part of the spring Boxeo Telemundo series. The next installment comes Friday, March 10, returning to this very venue as Mauricio Pintor (20-2, 13KOs) collides with Patrico Moreno (19-2, 14KOs) in a scheduled 10-round welterweight scrap.