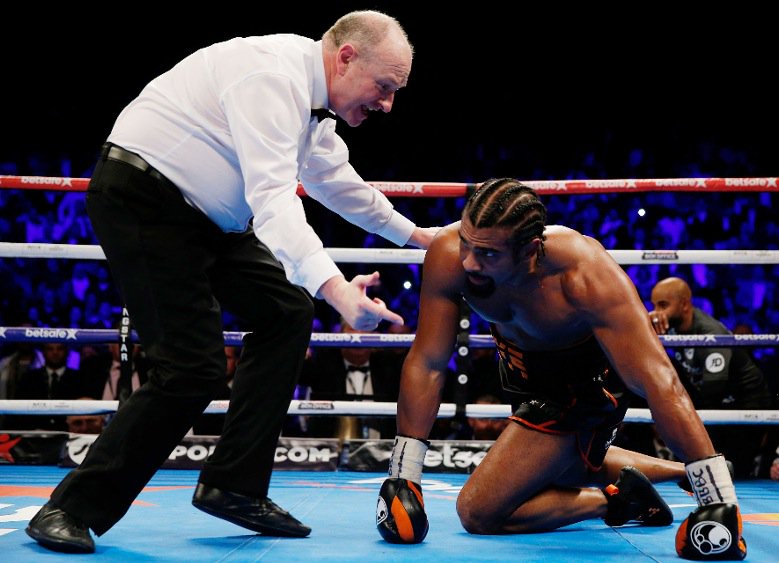 The one scenario at which most experts scoffed - Tony Bellew stopping David Haye - was exactly what came of Saturday's heavyweight clash, but the manner in which they arrived at that point was even more unpredictable.

A blown Achilles heel limited Haye's mobility for nearly six rounds before Bellew was able to finish off the former two division champ in 11 rounds Saturday evening at O2 Arena in London, England.

Even prior to the injury, Haye - who returned to the ring last January following a hiatus of more than three years - hardly looked like the heavyweight titlist of old, or anyone who can make any noise even in today's watered down version of boxing's most historically storied division. Bellew was a fleshy version of himself, far more so than the scrappy boxer who rose from the canvas to knock out Ilunga "Junior" Makabu to win a cruiserweight belt last May.

The extra weight seemed to help his cause, as he was relatively unfazed by Haye's superior punching power. Conversely, it was a relatively even bout through the first four rounds before Haye threatened to take over. His momentum was thwarted in round six, when Bellew initially stunned him before he was struck with a more devastating blow - a torn right Achilles heel that left him a sitting duck as he eventually hit the deck for the first of two times on the night.

What followed was Haye at least proving to the boxing world his fighting heart. It was absent in the biggest fight of his career, when he blamed a broken toe for a woeful performance in a points loss to Wladimir Klitschko in 2011. Limping around the ring on this night for five more rounds - and even winning a few of them - left viewers to admire his courage, even if forced to wade through the lack of skill level that polluted the second half of the contest.

While Bellew ultimately scored the win, it was anyone's guess as to how it took him so long to figure out how to force a more hectic pace on a one-legged boxer. The Brit boxed with a strangely cautious approach, obviously weary of Haye's neutralizer but still showing far too much hesitance as he watched his wounded foe flail around the ring after missing with wild punches.

Bellew finally managed to close the show in the championship rounds. A combination put Haye down and through the bottom two ropes onto the edge of the ring apron. It was unclear whether referee Phil Edwards was ready to administer a 20-count - the protocol for when a fallen boxer is forced out of the ring's live area - or if his rushed count was to suggest it would end at ten. Haye managed to climb back into the ring and onto his feet within eight ticks and willing to continue. His corner wasn't as brave, as 2016 Trainer of the Year Shane McGuigan climbed the apron to literally throw in the towel and rescue his charge.

Bellew has now won nine straight as his record advances to 29-2-1 (19KOs). The night marked his heavyweight debut - hopefully a one-and-done occasion, although the flawed win will likely present a false sense of hope that he can make a run above the 200 lb. limit. Seated ringside was his promotional stablemate and unbeaten heavyweight titlist Anthony Joshua, as both fight under the Matchroom Boxing banner. Joshua faces Klitschko on April 29. With a win, the world is at his fingertips - but a Bellew clash would not be well received, if it's even a thought.

What's not a thought for the time being is Haye making a last stand in the heavyweight division. Even without the injury, his skill level is far removed from what propelled him to a World cruiserweight championship reign and heavyweight title stay. The 36-year old was able to disguise his declining technique in soft comeback wins over Mark De Mori and Arnold Gjergjaj, the two knockouts lasting a combined total of barely six minutes of ring time.

The loss is his first since the aformentioned Klitschko debacle, as his record falls to 28-3 (26KOs).

The heavyweight bout topped a full card that aired live on Sky Box Office in the United Kingdom and on AWE (A Wealth of Entertainment) in the United States.