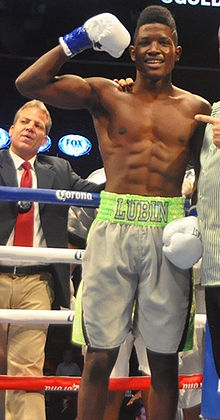 It was the main event battle between Keith Thurman and Danny Garcia for which boxing fans have awaited for months, but Erickson "Hammer" Lubin always intended to steal the show.

The unbeaten Orlando (Flor.) native did that in spades, making a major statement with a 4th round knockout of veteran contender Jorge Cota in the CBS-televised co-feature Saturday evening at Barclays Center in Brooklyn, New York.

An overhand left hand shot put Cota down and functionally out, with referee Earl Brown halting the super welterweight title eliminator at 1:25 of round four.

The explosive ending was preceded by cautious boxing from both contenders. For Lubin it was by design, whereas Cota took more than a round to get his offense untracked. Round two was a bit more active than the opening frame, with Cota closing the gap and getting off occasional power shots.

As it turned out, though, all it did was provide the visiting Mexican boxer with a false sense of security.

"I knew what to expect from him and how to draw him in," Lubin told CBS' Jim Grey after the fight. The 21-year young blue chip athlete spoke from experience, having simulated Cota's style during training camp for former stablemate Yudel Jhonson's Aug. '15 clash with the super welterweight contender. Cota won that bout, but hasn't fought since then nor has he added anything to his game.

Lubin was still two months shy of his 20th birthday at the time, and has steadily improved. Never short on confidence, he grew braver in round three as his power punching output dramatically increased. A left hand shot had Cota briefly stunned along the ropes, with body shots slowing down his opponent's mobility.

From there came the easy part in round four - finishing what he started.

"I baited him with the jab. I knew he'd come with the big shots early," Lubin noted afterward, expertly implementing the game plan put forth by trainer Jason Galarza, who has guided him from his early amateur years. "I put a few tricks on him, landed that overhand left and it was night-night."

The overhand left - known as "Jack" (his right hand is "Sledge") once again came with Cota's back touching the ropes, landing flush on his chin as he collapsed in a heap. The 29-year old boxer - who is coming up on eight years in the pro ranks - struggled mightily to regain his footing, prompting the stoppage and the biggest win of Lubin's career to date.

The loss is Cota's first since a 7th round stoppage to countryman Marco Antonio Rubio in June '12. He'd won 10 straight heading into the night, but hadn't fought since the aforementioned win over Jhonson as he falls to 25-2 (22KOs).

Lubin improves - in every sense of the word - to 18-0 (13KOs). Three of his past four bouts have aired live in primetime on free TV - scoring a 3rd round knockout of Daniel Sandoval on NBC last June; taking an eight-round decision over Ivan Montero last July on Fox; and stopping tough Juan Cabrera in two rounds last December on Showtime before coming up aces live on CBS.

It remains to be seen where his next fight lands and if he goes straight to the title or takes a stay-busy fight while waiting out the winner of a forthcoming title fight between champion Jermell Charlo and mandatory challenger Charles Hatley. Whenever that moment comes, he's excited not just for the opportunity, but what it represents.

"That would mean a lot to me, to Orlando Florida," Lubin said of the thought of - at 21 - becoming the youngest-ever champion in the history of the super welterweight division. "It would put it out there to all them young kids out there that they could do anything they want."