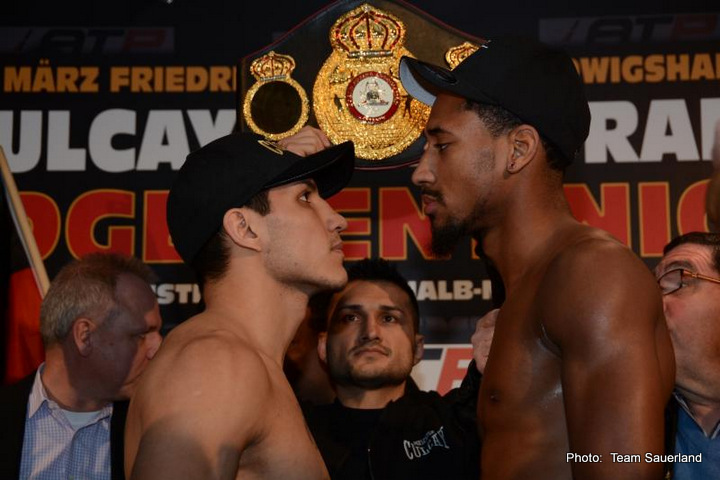 Demetrius Andrade is now a two-time super welterweight titlist, but "Boo Boo" nearly made a boo-boo in leaving this one in the hands of the judges.

The 2008 U.S, Olympian managed a split decision win over Jack Culcay to claim the WBA "Regular" 154 lb. title Saturday evening in Ludwigshafen, Germany. Scores were 116-112 twice in favor of Andrade, and a laughable 115-114 for the regional favorite Culcay, who was attempting the third defense of his title and first after being upgraded from interim titlist.

While the right guy won in the end, Andrade took a big risk in turning in an ordinary performance while fighting on the road. The manner in which he won the bout is an upgrade to his departure from the 2008 Beijing Olympics, where he believed to have been far enough ahead to coast down the stretch in an eventual quarterfinals loss to South Korea's Kim-Jung Joo.

On this particular evening, Andrade (24-0, 16KOs) was clearly the superior boxer, but not the dominant force that many had pegged as the slam dunk choice as the future of the 154 lb. division. Culcay screamed to anyone who would listen that he has come along much further than the version that was schooled by the 6'1" southpaw during the 2007 World Amateur Championships. The 31-year old Ecuador-born, Germany based boxer has proven it in recent years, riding an eight fight win streak into the night that included impressive wins over Maurice Weber and Dennis Hogan during his title run.

In his best moments of the bout, Culcay (22-2. 11KOs) was able to exploit the occasions where Andrade foolishly opted against using his massive height and reach advantages. It made for a closer bout than should have been the case, although most objective viewers had the 29-year old American winning no fewer than eight rounds - as did two of the three judges.

With the win, Andrade leaves the ring with a belt in tow for the first time since June '14. He'd claimed alphabet hardware in a Nov. '09 vacant super welterweight title win over Vanes Martirosyan - an interested viewer from his living room as he immediately commented through social media that his "right hands would put both (Andrade and Culcay) to sleep." Whether or not he gets another shot remains to be seen, as Andrade's reputation for taking on all comers carries a bit of a contradictory tone.

Perhaps through no fault of his own, Andrade withdrew from a planned title defense versus Jermell Charlo in Dec. '14. The action ultimately led to his being stripped of the WBO's version of the crown, thus beginning an ugly career stretch of fighting just once per year. His lone bout of 2014 was also his only title defense, scoring a 7th round knockout of miserably overmatched Brian Rose.

Just two fights have followed, but his most recent performance left industry insiders believing he was the super welterweight version of the Chupacabra. Andrade manhandled Willie Nelson en route to a 12th round stoppage last June, which aired live on Showtime. The win was an emphatic reminder that the road to divisional supremacy still had to run through him.

Saturday's performance was enough to get the win, no easy feat on the road and coming off of a nine-month layoff. The latest inactive stretch was due to a scheduling snafu, with the two initially due to clash last November, as per the terms of the purse bid won by Culcay's promoter Sauerland Event. A massive breakdown in communication led to the fight falling through and the WBA reordering a purse bid hearing.

In the end, it was win tonight and look good the next time for Andrade. While the boxing world will be watching his every move, here's to hoping that "next time" comes a lot sooner than next year.