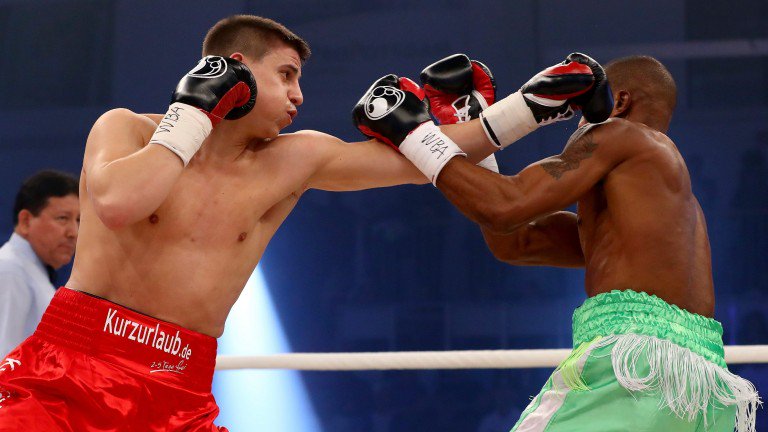 It wasn't the most memorable way to secure his first title defense, but Tyron Zeuge remains unbeaten and still a super middleweight titlist.

The Berlin-based boxer - who turns 25 in May - was forced to settle for a technical unanimous decision after a cut ended his bout with challenger Isaac Ekpo after five rounds Saturday evening at the MBS Arena in Brandenburg, Germany. Scores were 49-46, 49-47 and 48-47 in favor of Zeuge, who returned to the very same arena that saw him stop Giovanni DeCarolis in the 12th and final round of their rematch last November to win the title after being held to a draw in their first outing earlier last year.

In fact, the night marked his third bout within his past four ring appearances to take place at the site, but proved to be the least memorable of the lot. Zeuge enjoyed a relatively quick ring return following his title winning effort late last year, but unfortunately an even quicker night's work. The night was never easy for the defending titlist, whose task at hand was solving the scrappy style of Ekpo (31-3, 24KOs), a 34-year old boxer from Nigeria making his second attempt at a major title.

Ekpo's previous shot also took place in Germany, dropping a 12-round decision to then-titlist Robert Stieglitz in their Oct. '13 clash. Saturday's bout was far more competitive, but lacking momentum due to an accidental headbutt in round three which produced a gushing cut over Zeuge's right eye. Blood streamed down his face, but referee Raul Caiz Jr. opted to allow the action to continue.

Had the bout been stopped to that point. the fact that Zeuge trailed on two of the three scorecards through three rounds would have been a moot point as the bout would have been ruled a technical draw due to not lasting a minimum of four rounds. Zeuge seized the moment in the six additional minutes he was allotted to continue, winning rounds four and five on two of the three scorecards before it was decided that the cut was too severe to allow him to continue.

With the win, he collects his first successful defense as his record advances to 20-0-1 (11KOs). The five rounds of action matches his shortest outing in more than three years, the previous occasion coming in a 5th round stoppage of Stjepan Bozic in Dec. '14.

Ekpo falls to 31-3 (24KOs) with the loss, ending a nine-fight win streak in the process.