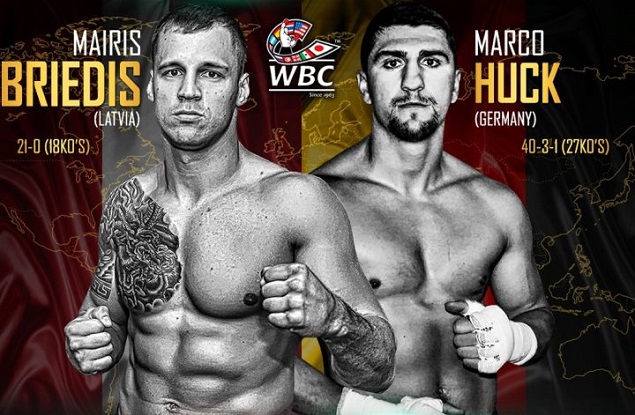 With the stakes suddenly raised, Marco Huck and Mairis Breidis made sure to ramp up their respective training camps in their upcoming make-or-break clash.

Both boxers easily made weight ahead of what is now a vacant cruiserweight title fight which takes place Saturday evening at Westfalenhalle in Dortmund, Germany. Huck and Breidis each tipped the scales at 199.5 lbs. during Friday's weigh-in ceremony which saw the title hopefuls engage in an intense staredown immediately afterward.

The bout was initially designed as an interim title fight with the winner due to face WBC champ Tony Bellew, However, the Mexico City-based sanctioning body declared the title vacant earlier in the week as it was learned that Bellew - coming off of a recent win over longtime domestic rival David Haye - will likely remain at heavyweight.

With that, Saturday's winner will become the new champion, with the only one obligation that might not even play out. If Bellew - who has since been declared Champion Emeritus - decides to return to cruiserweight for his next fight, in which case he will be first in line to challenge for the title.

Huck (40-3-1, 27KOs) looks to make a second go at the cruiserweight title stage after having previously etched his name in the history books. The Serbia-born Croatia who lives in and fights out of Germany tied the divisional record for most consecutive defenses of the crown he first claimed in an Aug. '09 win over Victor Ramirez. The only setback among a run of 13 defenses came in a brief foray into the heavyweight division, where he suffered a hotly contested points loss to then-titlist Alexander Povetkin in Feb. '12.

Of course, his own title reign was hardly free of controversy as Huck was considered the benefactor of a number of questionable decisions over the course of his six year reign. His efforts to break the mark previously set by England's Johnny Nelson were thwarted in his Aug. '15 Fight of the Year-level slugfest with Poland's Krzystzof Glowacki, who overcame a 6th round knockdown to drop and stop Huck in the 11th round in Newark, New Jersey.

His stateside debut and title reign both ending in disappointment, Huck has since rebounded with two wins in 2016, scoring a 10th round stoppage of Ola Afolabi after having gone the distance with his longtime adversary in three prior title defenses (2-0-1 over that stretch) and a wide points win over Dmytro Kucher last November.

Breidis (21-0, 18KOs) makes his first attempt at a major title. The unbeaten slugger from Latvia earned his place in line following a 9th round knockout of Olanrewaju Durodola in their brutal punch-a-thon last May. He has since marked time with a 3rd round knockout of previously unbeaten Simon Vallily last October in England.