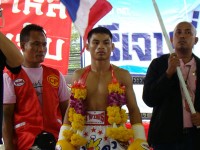 In a bout that snuck under the radar, long-reigning strawweight titlist Wanheng Menayothin remained active with a six-round decision win over Jaysever Abcede in their non-title affair Friday afternoon in Bangkok, Thailand.

The bout comes just two months after Menayothin's last ring appearance, a narrow 12-round points win over previously unbeaten Melvin Jerusalem this past January. It's hardly uncommon for the 31-year old Thai boxer to fight so frequently, consistently packing in no fewer than four fights per year since becoming champion.

Nor is it a surprise was that he would engage in just a six-round affair, having previously done so during his title reign and on this occasion probably working to his benefit. Abcede - an aggressive southpaw from Philippines - forced a fast and uncomfortable pace from the outset, disallowing Menayothin a chance to measure up his foe but rather fight in reactionary mode.

It made for an entertaining scrap that came with the unfortunate backdrop of little more than pride at stake and not being extended longer in rounds. Abcede sought to stand in the pocket and pick apart his opponent, but Menayothin eventually fell into a steady rhythm, consistently scoring power shots and utilizing in-and-out movement to minimize the incoming.

Scores were not revealed in the end, but Menayothin was able to breathe a sigh of relief once his arm was raised in victory as he improves to 46-0 (17KOs). Abcede - who fought outside of Philippines for just the third time in his career - falls to 13-6 (8KOs).

Next up for the unbeaten champ will likely be a voluntary defense - or possibly even two - while waiting out a May 27 final eliminator between top contenders Saul Juarez and Leroy Estrada. Juarez dropped a competitive decision to Menayothin in their title fight last August, having not fought since.

Menayothin has fought three times since then, and 11 times over the course of a title reign which began with a 9th round knockout of Oswaldo Novoa in Nov. '14.

The non-title fight aired live on Channel 7 in Thailand, as well as the network's free-to-air website ch7.com/live.