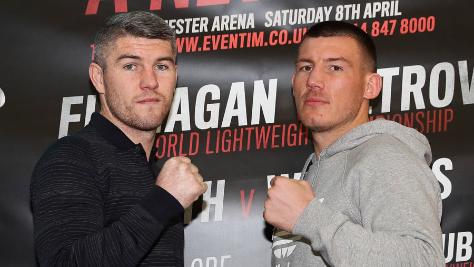 Apparently, this was one title vacancy that was never meant to be filled.

Liam Williams saw a developing points win over Liam Smith evaporate in an instant when he was declared unable to come out for the 10th round of their vacant interim super welterweight title fight Saturday evening at Manchester Arena in Manchester, England.

A cut over his right eye was ruled to have been caused by a punch, and considered too dangerous for his corner to allow him to continue.

However, the title remains vacant due to Smith coming in nearly two full pounds over the 154-pound divisional limit during Friday's pre-fight weigh-in. The former titlist made more excuses than effort as to why he was unable to hit the mark even in the additional time allotted to shed the excess weight.

Still, victory was in the cards for the Liverpudlian, as Williams - who was well in control for much of the night - was only one point ahead on all three scorecards at the time of the controversial stoppage. Replays remained inconclusive as to whether an actual punch caused the cut, as Williams was the victim of at least two headbutts that went undisciplined by referee Terry O'Connor.

Prior to that point, Smith had his own problems. The second youngest of four boxing brothers fell behind early and suffered a cut along his right eyebrow as he struggled to keep pace with the more active Williams.

At his best, Smith landed the more telling blows and rallied late in round nine, after Williams' right eye was cut and eventually swollen shut. The damage sustained was enough to convince his corner that he had no business leaving his stool for another round, never mind the nine remaining minutes he would have to survive in order to make it to the final bell and the scorecards.

Smith advances to 25-1-1 (14KOs) in his first fight back following a one-sided knockout loss to Mexico's Saul 'Canelo' Alvarez - also ending his brief title reign - last September. The 28-year old boxer hoped to become a two-time beltholder, but showed up at 155.9 lbs. at Friday's weigh-in, thus disqualifying him from the running but not the fight itself.

It remains to be seen if Williams - who easily made weight and was virtually foul-free throughout Saturday's affair - will be granted another opportunity at an interim title, or if the World Boxing Organization (WBO) will just wait out the result of Alvarez' May 6 (way) above the limit catchweight clash with countryman Julio Cesar Chavez Jr. before deciding which direction to head in declaring its next champion.

The bout aired live on BT Sport and BoxNation in the United Kingdom.