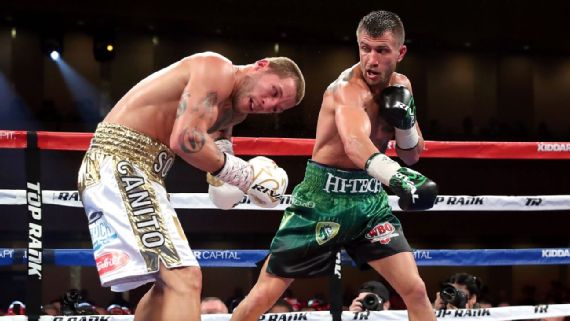 Vasyl Lomachenko was a smash hit in every sense of the phrase.

The two-time Olympic Gold medalist and two-division titlist continues to prove his worth as one of the very best boxers in the world, the latest coming in a 9th round knockout of Jason Sosa. The HBO-aired main event played to a sold out crowd of 2,828 adoring fans at MGM National Harbor in Oxon Hill, Maryland.

Given the increasing difficulty in finding willing opposition for Lomachenko, it went without saying that Sosa showed his fighting heart in not just saying yes but agreeing to a blank check in accepting the fight. The resurgent contender from Camden came up the hard way, with just three amateur fights and a 1st round knockout loss early in his career before turning it all around.

After staggering out to a 4-1-3 career start, Sosa racked up 16 wins - all but two by knockout - in 17 fights, including a title-winning stoppage victory over Javier Fortuna last June in China, followed by a points win over Stephen Smith in Monaco. Both shows came in neutral locations but against opponents backed by the hosting promoter.

Needless to say, Sosa - raised Philly-tough in boxing terms - always found a way to prevail, but was simply outgunned versus the supremely gifted Lomachenko. As much was evident in the early going and only proved more so as the fight went deeper into the night. Lomachenko started off a bit slow, but picked up steam in outlanding Sosa by more than 2:1 in eight of the nine rounds, often landing more than five times as many punches.

The fighting pride of Ukraine - universally hailed as one of the best amateur boxers in history - opened up a two-fisted attack in round five, a frame that saw the southpaw land 42 of 91 punches. That total was surpassed only by his frightening output in round eight, scoring on 48 of 96 punches - enough to convince Sosa's longtime trainer Chino Rivas to ask for something more or else he was going to stop the fight.

Rivas stayed true to his word, not liking the lopsided action that took place in round nine. The frame - and the bout - ended with Rivas removing Sosa's mouthpiece in the corner and informing referee Kenny Chevalier that the brave young boxer he loves like a brother was done for the night.

It's the first loss since 2010 for Sosa, who falls to 20-2-4 (15KOs). The 29-year old knockout artist has extracted as much as he can out of a pro career that was preceded by just three amateur bouts. There's nothing that says he can't return to the title picture, as he was a bonafide Top 10 contender (and former titlist who vacated his belt just to accept this opportunity) heading into the night.

That's just how much talent he was up against on this particular evening,

Still, he's the one guy who said yes after several others - including Orlando Salido, the only pro boxer to hang a loss on Lomachenko - said no to this particular opportunity. For that, Lomachenko had all of the respect in the world for the boxer who stood opposite corner as evidenced by their in-ring embrace at fight's end.

With the early finish, Lomachenko is now a perfect 3-0 with three knockouts since moving up to super featherweight last June. His run began with a 5th round knockout of Roman Martinez, before breaking down and stopping Nicholas Walters and now Sosa as he improves to 8-1 (6KOs).