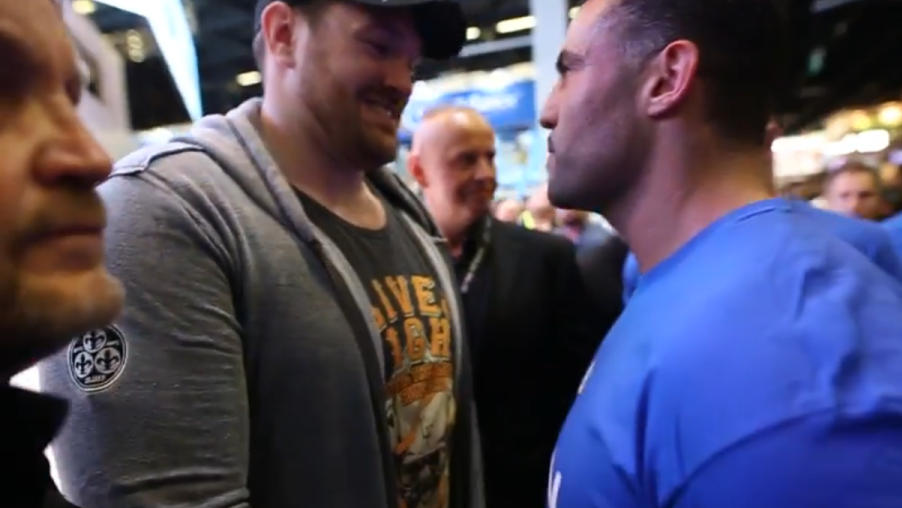 If in fact Tyson Fury returns to the ring anytime soon, it appears he has lined up his first comeback opponent for the occasion.

The unbeaten Brit - who hasn't fought since beating Wladimir Klitschko for the World heavyweight crown in Nov. '15 - managed to exchange words and a few light shoves with veteran contender Manuel "Diamond Boy" Charr during a recent FIBO Fitness Fair in Germany over the weekend. The backdrop offered a fitting touch of irony, as Fury's fluffy physique appears to be well north of three bills but nonetheless was as jolly as ever in being surrounded by adoring fans.

One interested spectator was eager to meet with him, but hardly to secure an autograph and photo with the heavyweight champ.

Charr - a Lebanese heavyweight who lives in and fights out of Germany - physically looks as if he could jump in the ring today, a natural fit for the weekend fitness showcase as his team was on hand to endore Easy Motion Skin, a wireless electronic training method.

Still, at the forefront for the 32-year old heavyweight was confronting the most notable boxer in the building. Dwarfed in size by nearly six inches, Charr showed no fear in stepping to Fury and expressing his interest in a future showdown.

"Hey Tyson you said you want to box again," Charr was heard stating to the Brit while standing in the middle of a crowd, according to video footage that has since made its way to YouTube. "Here I am. I am the number 6 in the WBA ranking, you can fight me."

Given that he has much bigger fish to fry should he return anytime soon, Fury was surprisingly receptive to the offer.

"“I want to fight you, Diamond Boy, whenever you want, though you’re too small for me," Fury quipped, though unsure if referring to his natural size or financial stature in the rich division. “When I’m back I’ll fight you first, 100 percent.”

When he comes back remains an unanswered question. Fury spent all of 2016 battling drug and alcohol addiction along with extended spells of severe depression, none of which was lost on Charr who perhaps crossed a line in his final parting words to the unbeaten Traveler.

"See you in the ring, mad man," quipped Charr, a comment that was met with a light shove from a disgusted Fury. Charr responded with a more forceful push before their respective teams immediately intervened to separate the two.

Fury was twice due to face Klitschko in a rematch in 2016, first pulling out of their scheduled July clash due to a freak injury suffered during training camp. Subsequent plans hit the scrap heap once it was declared that he was mentally unfit to proceed with his career until he was able to secure the help he needed for substance abuse and potential mental illness.

Charr (30-4, 17KOs) hasn't exactly lit the boxing world afire, but on his best day remains a stern test for any given heavyweight. He managed two wins in 2016, the latter a 10-round decision over previously unbeaten Sefer Seferi last September in Germany.

The streak follows his landing on the very wrong end of a highlight reel 5th round knockout at the hands of Mairis Breidis, who made a one-time pit stop to heavyweight for their Aug. '15 clash. It was a coming out party for Breidis, who dropped back down to cruiserweight and recently became the first-ever Latvian boxer to win a world title after a sound 12-round win over Marco Huck in their vacant cruiserweight title fight earlier this month.

Prior to the aforementioned knockout loss, Charr was flattened in seven rounds by Alexander Povetkin in their May '14 clash of Klitschko victims, as both had suffered their first career defeats at the hands of the then-reigning heavyweight king.