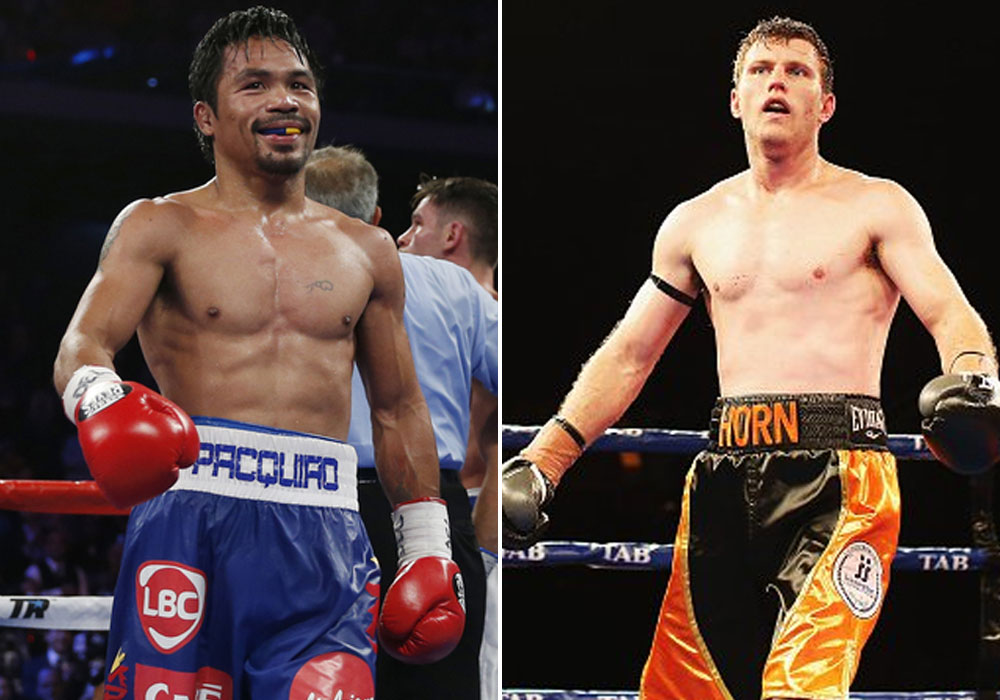 The proposed showdown between punching politician Manny Pacquiao and unbeaten Jeff Horn was made official over the weekend in Australia, but still required a key signature.

That moment has come, as the staff at Top Rank has confirmed the fight as officially official.

Pacquiao's legendary career - which has included title wins in a record-setting eight weight divisions - gains another new chapter as he heads to Australia for the first time as a pro. The July 2 clash with Horn (which will air Saturday, July 1 in the U.S. given the time difference) at Suncorp Stadium in Brisbane, Australia will mark the first defense of his third tour as a welterweight titlist.

The bout has been in the works for several months, but was placed on the back burner when Pacquiao (59-6-2, 38KOs) withdrew from talks to instead pursue a potential clash with former Wild Card gymmate Amir Khan. Just as that long-pondered matchup appeared to gain legs, a clash with Horn (16-0-1, 11KOs) once again surfaced to the forefront.

In finalizing terms, Pacquiao fights for the second time in his "comeback." The most belted boxer in prizefighting history - having won titles at flyweight, super bantamweight, featherweight, super featherweight, lightweight, super lightweight, welterweight and super welterweight - stepped away from the game following a title-regaining points win over Tim Bradley in their rubber match last April. The win put him up 2-1 in their three-fight series, also his first ring appearance following a lopsided defeat to Floyd Mayweather in what will serve for a very long time as the most lucrative event in boxing history.

The repeat win over Bradley was met with a retirement announcement, as Pacquiao - a two-term Congressman in the Sarangani province - gained one the open seats in the 2016 Philippines Senatorial election. The claim was that as a full-time politician, he could not perform both jobs at the same time.

Given the manner in which rules are bent in both worlds, Pacquiao found a way to co-exist in both worlds. The comeback tour began with a rousing points win over Jessie Vargas last November, with no real plans for the future despite Arum already hinting at a potential Horn clash given his newly formed relationship at the time with Duco Events.

The brass at the leading promotional outfit in Australia were pleased enough with talks to where they felt comfortable revealing the event to the Australian media over the weekend. The announcement from Down Under came while still awaiting Pacquiao's signature, but a verbal agreement was enough to proceed as planned.

Horn enters his first career title fight. The 29-year old - who was born and raised in Brisbane and will come in as the overwhelming crowd favorite - enjoyed a solid campaign in 2016, winning all three of his bouts on the year by knockout. The lone scare of the lot came last April, when he traded knockdowns with former two-division titlist Randall Bailey before putting away the veteran knockout artist for good in the 7th round.

The feat was followed up by stoppage victories over Rico Mueller and most recently former lightweight titlist Ali Funeka last December.

He will come into this bout as an overwhelming underdog - but at least as the local and sentimental favorite.

" Manny knows who will be the crowd favorite on July 1, but he can't wait to give Australia and the world a great performance," Arum said of the Filipino southpaw, who last year traded in his Congressional hat for a seat in the Philippines senate. "It's going to be unbelievable event."

Televised coverage for U.S. viewers has not yet been established, but is expected to be revealed in the coming weeks. The event will likely air on Pay-Per-View on this side of the world, whether through American cable giant HBO or independently produced by Top Rank.