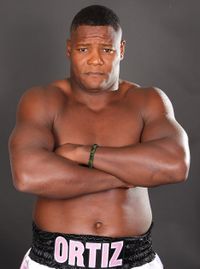 The one time Luis Ortiz finally catches a break, it turns out to be in the literal sense.

Plans for the unbeaten Cuban southpaw to return to the ring on April 22 versus Derric Rossy were dashed just one week ahead of fight night, when a hairline fracture to his thumb put him on the sidelines for at least four weeks. Rumors of the injury were confirmed to FightNights.com by Ortiz' head trainer, Herman Caicedo.

"It's a tough break - literally," noted Caicedo, who has been through all of the good times and bad with Ortiz (27-0-0-1NC, 23KOs). "This fight was important to keep active while waiting for his shot at the world championship. So now we just have to wait probably without another fight in between."

Ortiz' bout with Rossy was slated to appear on the undercard of the welterweight clash between ex-titlists Andre Berto and Shawn Porter, which remains intact and atop the Showtime-televised bill at Barclays Center in Brooklyn, New York. Ortiz-Rossy was due to appear on the lead-in SHO Extreme telecast along with a vacant bantamweight title fight between Brooklyn's Amanda Serrano - who drops down from her super bantamweight title reign for the occasion - and Dominican Republic's Dahiana Santana.

While the heavyweight bout is scratched, the SHO Extreme show goes on as scheduled, due to air at 7:30pm ET. Showtime brass have confirmed to FightNights.com that the Serrano-Santana bantamweight title fight will now run alongside a terrific prospect-level super lightweight bout that managed to fly well below the radar, as unbeatens Jonathan Alonso and Jose Miguel Borrego meet at the crossroads in a scheduled eight-round battle.

As for Ortiz, his role in the show is now limited to non-participatory viewer. However, he will undoubtedly serve as an interested observer for a major heavyweight clash one week later, as he remains the mandatory challenger for the titantic showdown between unbeaten titlist Anthony Joshua and former World heavyweight champion Wladimir Klitschko, which takes place in front of a record-breaking crowd of 90,000 fans at Wembley Stadium in London, England.

Interestingly, the opportunity comes for Ortiz while having signed with Al Haymon and after serving a brief two-fight stint with Joshua's promoter, Eddie Hearn.

What doesn't come in between is a ring appearance to fill the gap since his last bout, a 7th round knockout of David Allen last December. The stay-busy affair came just four weeks after a pedestrian-like 12-round win over Malik Scott in a painfully dull affair that is in severe contrast to the energy that normally comes with Ortiz' fights.

That very fighting spirit was put to the test as he considered the possibility of proceeding with his clash versus Long Island's Rossy - a tough out for any healthy heavyweight - while either concealing or heavily protecting the injury. Instead, cooler heads prevailed as he was instructed to not risk a sure thing.

"They don't call him King Kong for nothing, he's determined to fight every heavyweight in the world, one good hand or two, or whatever" said manager Jay Jimenez. "In the end he knows that we cannot risk the reward that awaits him in the future, getting the winner between (Joshua and Klitschko). It's just not worth it."