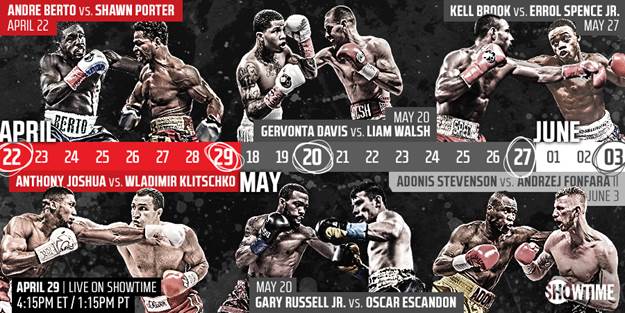 As was the case a year ago, Showtime Sports managed to secure the most significant fight of the season just in time to roll out a loaded boxing schedule.

The bout will air live on Saturday afternoon on Showtime in the United States (evening time in London, with the event to air on Sky Box Office) as part of a joint effort with cable rival HBO, which will air the show later that evening in primetime via same-day tape delay.

As for the rest of the spring schedule, there's no sharing as Showtime hit the bricks in adding to what has already been a stellar 2017 for the network.

On the SHO Extreme portion, Amanda Serrano looks to make history by becoming the first female boxer ever to win major titles in five weight classes. She drops down in weight to challenge Dahiana Santana for the vacant bantamweight title.

"We continue to break the glass ceiling on women’s boxing, deliver the biggest bouts from overseas and see champions take on champions to unify divisions," Espinoza points out. "We are proud to be re-shaping the boxing landscape both in and out of the ring.”

The full springtime schedule is as follows:

If there is any criticism (and it wouldn't be boxing without some), it would be that there isn't as much meat on the bone as was the case with its similar announcement around this time one year ago. The centerpiece of the 2016 spring/summer schedule was the rescheduling of the welterweight title clash between Thurman and Porter, which aired live on CBS in the network's first primetime boxing telecast since Leon Spinks' historic upset of the late Muhammad Ali to win the World heavyweight championship in their first fight in Feb. 1978.

Also accompanying last year's announcement was the suggestion of forthcoming plans in store for a featherweight showdown between then-unbeatens Leo Santa Cruz and Carl Frampton, as a deal was struck but still lacking final details at the time. The two wound up facing off last July, with Frampton - who five months prior outpointed longtime UK rival Scott Quigg to unify two titles at super bantamweight - prevailing in their 12-round thriller to win a featherweight title in one of the very best fights of 2016.

Their rematch this past January also proved entertaining, with Santa Cruz avenging the lone loss of his career in claiming a points win to regain his title and hand Frampton his first career loss. It was the second telecast of 2017 for Showtime Championship Boxing, which came flying out the gate two weeks prior with a super middleweight title unification clash between Badou Jack and James DeGale. Unfortunately, their bout ended in a 12-round draw and thus no unification in the end, but served as the first true Fight of the Year contender as the action was non-stop from beginning to end.

That show also featured Gervonta Davis in a breakout performance, making it look effortless in dismantling previously unbeaten Jose Pedraza to win the super featherweight title that he defends abroad versus Liam Walsh as part of a bi-continental two-telecast trek on May 20.

If there is a bout on the schedule that rivals the wow factor that comes with Joshua-Klitschko, it's the May 27 welterweight crossroads bout between defending titlist Kell Brook and unbeaten rising star Errol Spence. The bout takes place at Bramall Lane in Brook's hometown of Sheffield, England. marking the Brit's first trip back to welterweight after moving up two weight classes in an eventual 5th round knockout loss to unbeaten, unified middleweight champion Gennady Golovkin.

Contrasting the criticism of the spring schedule featuring quantity but perhaps not loaded with quality, is the fact that Showtime releases this block of events on the heels of a loaded winter season that featured five major shows in 11 weeks. Chief among them was Thurman's welterweight title-unifying win over previously unbeaten Danny Garcia live in primetime on CBS, with their March 4 headliner serving as the second-highest rated primetime telecast of the 21st century, just behind Thurman's 12-round win over Robert Guerrero in their March '15 encounter which kicked off the Premier Boxing Champions (PBC) movement.

Also in the works - but not part of the spring rollout as plans are still in development - are efforts to provide a second ring appearance each for boxing stars Mikey Garcia and Adrien Broner in separate summer dates.

Garcia became a Fighter of the Year contender with his highlight-reel 3rd round knockout of previously unbeaten Dejan Zlaticanin on the January 28 Santa Cruz-Frampton II undercard to pick up a major title in his third weight class. If sanctioning body rules are to be honored - and all parties acting in a cooperative effort - then his next order of business should be negotiations for a showdown with mandatory challenger Jorge Linares, who is fresh off of a 12-round near-shutout of Anthony Crolla in a virtuoso performance in their rematch this past March, which aired live on Showtime from Manchester, England.

Not quite as tidy are plans for Broner's next bout. The former four-division titlist fended off a brave stand versus Adrian Granados to win a hard-fought 10-round decision atop a February 18 tripleheader from his hometown in Cincinnati, Ohio. The show also featured Lamont Peterson winning his second title in as many weight classes with a 12-round welterweight title lifting effort over David Avenesyan, as well as Marcus Browne's controversial knockout win over Top 10 contender Thomas Williams Jr.

All told, the spring updates gives the network 11 telecasts as part of its Showtime Championship Boxing and Showtime Boxing International series along with several more installments from its long-running Shobox series, which has truly stepped up its game in 2017. The spring schedule ends with a special Hall of Fame weekend edition of Shobox on June 9, live from Turning Stone Resort & Casino in Verona, New York. The show airs two days before the series' announcers Barry Tompkins and Steve Farhood gain enshrinement in the International Boxing Hall of Fame in nearby Canastota,

Taken all that into consideration, there's a lot to the Showtime brass' claim that the network is unrivaled these days when it comes to delivering the goods to its viewing audience.