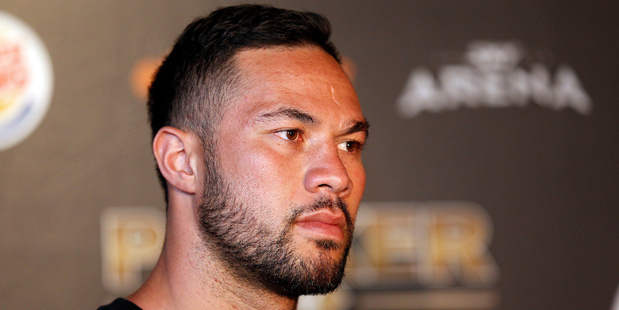 In discussing his future plans as a heavyweight titlist. it's clear that Joseph Parker truly wants to live up to the "world" part of his world champion label.

The charismatic 25-year old touched down in his native New Zealand on Saturday morning well ahead of his May 6 title defense versus fellow unbeaten heavyweight Hughie Fury at Spark Arena in Auckland following a full training camp in Las Vegas, Nevada. The bulk of his career has been spent in his home country, save for two bouts in the United States and an appearance in Samoa in honor of his parent's heritage.

He still has to get past Fury, but assuming all goes well it could prove to be his final appearance at home at least for the foreseeable future.

"(This is) probably is the last time I will be doing this (fighting in New Zealand," Parker told reporters on site to catch a glimpse of his return in country. "[A]fter this fight we are looking at fighting in different countries and all around the world so we have to establish ourselves in different areas."

Parker (22-0, 18KOs) will make the first defense of the title he claimed in a hard-fought majority decision victory over Andy Ruiz last December. The title-winning effort was part of a massive breakout campaign in 2016, where his ascension from prospect to contender to champion also included a spirited 12-round victory over perennial Top 10 contender Carlos Takam last May.

Fury (20-0, 10KOs) enters his first career fight under dubious circumstances. The cousin and training stablemate of former world champion Tyson Fury hasn't fought since a technical decision win over Fred Kassi last April, which (perhaps sadly) marks the most significant win of his career to date. The 22-year old from England has yet to arrive in New Zealand, nor has his team given any indication of when they plan to make the trek from UK although they are due to hold a press conference on April 26.

As for the defending champ, he wants to soak in as much of his homeland as possible, knowing that future fights will likely come in unfamiliar territory.

"I am going to make the most of this last opportunity to fight here in New Zealand," Parker promises.