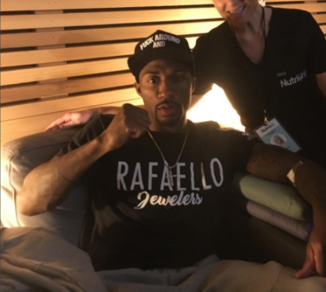 Perhaps Charles Hatley would rather have fame than fortune and prizes, even if that fame comes for all of the wrong reasons.

The super welterweight contender has managed to jeopardize his chances of contending for Jermell Charlo's WBC title following a social media post that could force the World Boxing Council and the New York State Athletic Commission ahead of their Showtime-televised bout Saturday evening from Barclays Center in Brooklyn, New York. Sometime after Friday's weigh-in, Hatley not only received an IV treatment - which is prohibited in according with the WBC's Clean Boxing Program, barring a filed exemption - but went out of his way to frame the moment on his Instagram account.

"Getting my @nutridrip to prepare for the big fight! Feeling amazing already!," Hatley posted on his Instagram, though the message has since been scrubbed from his timeline.

The matter is being looked into by the WBC, NYSAC and Showtime, all of whom declined comment at this time.

The worst case scenario for Hatley - who hasn't fought since an 11th round knockout of Anthony Mundine in Nov. '15 - is that the fight gets canceled (though highly unlikely) and that he faces a fine and suspension.

Word from ground zero is that a more likely outcome is that the fight will go on, but with the WBC to determine whether or not he will be eligible to fight for the title. A fine and suspension could still come into play if he is found to be in violation of the Clean Boxing Program, although it would be a matter for the WBC to handle as the instance doesn't directly violate any rules in place with the NYSAC.

Charlo (28-0, 13KOs) will make the first defense of the WBC 154-pound title he acquired in a come-from-behind 8th round knockout of John Jackson last May, live on Showtime from Las Vegas. Hatley and promoter Don King decided on that evening that they would attempt to spoil his victory party. Their efforts, however, were met with proverbial egg on their faces as they instead rushed Jermall Charlo - mistaking him for Jermell - after his win over Austin Trout.

The past 11 months have proven that instance to be the least embarrassing development in the ongoing saga surrounding this matchup.

Less than a month prior to fight night, Hatley allowed outside forces to whisper in his ear and lead the Dallas native to believe it would be a good idea to sue King. The timing was baffling to say the least, considering how hard King worked to make sure his client was treated fairly in putting together the title fight.

Hatley's antics have carried all through fight week, not hesitating to jaw at the unbeaten titlist at every turn and even at one point his team nearly starting a brawl with Charlo's side.

With the latest development, you have to wonder if he is simply incapable of getting out of his own way.

Whatever comes of the investigation, Charlo and his team will act accordingly.

"We want the fight, Jermell is ready to go," Derrick James, Charlo's head trainer told FightNights.com. "We leave the matter in the hands of the WBC and NY commission. Whatever they decide, we'll roll with, but 'Mell wants to knock this guy's head off already. We've waited a long time to get in the ring and take care of this guy."