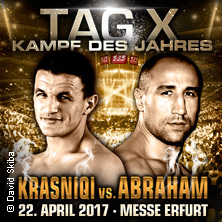 No matter how long he's been around and how many losses he's endured, Arthur Abraham remains a deep threat in the super middleweight division.

True to career form, Abraham struggled out the gate as he has historically given away early rounds in his most significant bouts. Krasniqi used this to his advantage, using lateral movement to keep his opponent off rhythm while attempting to bank rounds.

Abraham turned the tide in round five, hurting Krasniqi and never looking back. The action was largely one way from that point onward, with Krasniqi enjoying pockets of success but expending too much energy in failed efforts to keep a stalking Abraham at bay.

With the win, Abraham advances to 46-5 (30KOs). The win is his second straight since his second tour as a super middleweight titlist came to a disappointing end with a 12-round shutout loss to Gilberto Ramirez last April.

Abraham remains by far the most active boxer of his Super Six World Boxing Classic peers, an amazing feat considering many had written him off following humbling losses to Andre Dirrell, Carl Froch and Andre Ward. He has gone on to enjoy two title reigns at super middleweight - to go along with his middleweight run prior to the Super Six - and is 14-2 since the 2 1/2 year tournament that allegedly ruined his career.