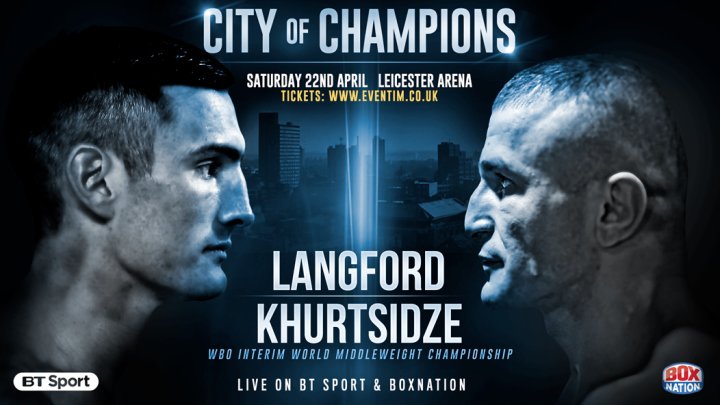 For years, Gennady Golovkin has served as the middleweight division's boogeyman. With the reward now matching the risk, the unbeaten Kazakhstan may have to pass that title along to Avtandil Khurtsidze.

The squat Brooklyn-based Georgian violently snatched the WBO interim middleweight title with a 5th round knockout of Tommy Langford. A left hook put Langford down out out to bring a sudden end to their BoxNation/BT Sport main event battle Saturday evening at Leicester Arena in Leicester, England.

The bout was made after Billy Joe Saunders - the reigning WBO titlist - and promoter Frank Warren asked mandatory challenger Khurtsidze to step aside so they could pursue a June unification clash with Golovkin. Their four-belt showdown never materialized, leaving Warren on the hook for a step-aside fee payable to Khurtsidze as well as having to comply with a WBO ruling for an interim title fight to establish the absolute next in line for Saunders.

Locals naturally hoped Langford would prevail and the previously unbeaten Brit boxed as well as he could in the early going. None of it seemed to faze Khurtsidze, who stalked his prey like creeping death, narrowing the gap with each passing round before going in for the kill.

A sudden ending to the bout came early in round five, when a long left hook from the compact frame of Khurtsidze whistled across Langford's chin, dropping him hard to the canvas. Langford (18-1, 6KOs) never threatened to rise to his feet, despite Khurtsidze's goofy-like taunts in daring him to get up for more.

It never happened, as the contest was halted at 0:27 of round five.

The 5'4" Khurtsidze brings with him a jumbo-sized punch and personality to match, which can make for a lot of fun in today's middleweight division. He improves to 33-2-2 (22KOs), having now won 10 straight including his last six by knockout ever since relocating to Brooklyn, where has trained with the likes of former middleweight titlist Daniel Jacobs.

Next up for Khurtsidze is Saunders, who was ringside for the contest and didn't seem overly thrilled with the final outcome, although has vowed to honor his mandatory title obligations.