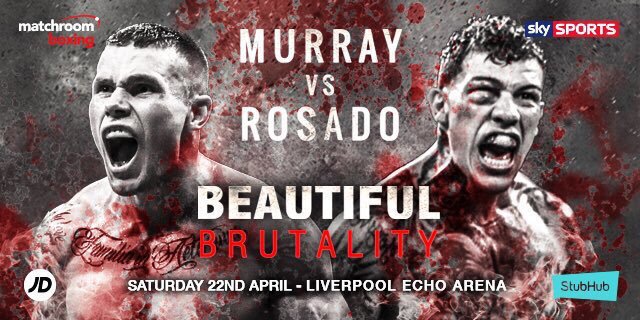 An 114-114 even tally turned in by Terry O'Connor (which also matches how FightNights.com scored the contest) was overruled by cards of 116-112 and a ban-worthy 119-109 score in favor of Murray, who had to avoid an incensed and free-swinging Rosado following the final verdict before order was restored.

What was billed as a can't miss action fight instead rolled out as a chess match in the early going. Rosado - reunited with trainer Billy Briscoe, from whom he split in favor a brief stint with former 154 lb. titlist Fernando Vargas - sought ways to make sure his skin held up and that he would be around to make a fight of it in the later rounds. It meant boxing early and avoiding as much contact as his leaky defense would allow, a tactic that seemed to disrupt what Murray had in mind on the night.

Momentum shifted throughout the first half of the contest, before Murray took over in the middle rounds. The veteran middleweight contender - fighting at the weight for the first time in more than two years after making a run at super middleweight - dialed up the intensity, which placed Rosado on the defensive and clearly behind the eight-ball in hoping to win a decision on the road.

Sensing victory was secured, Murray eased off the gas in the latter rounds. Rosado seized the moment as best as he could, punishing Murray's body in round 11 and remaining on the hunt in the 12th and final round. At the very least, it appeared to be enough to close the gap if nut pull even but judges Grzegorz Molenda and Leszek Jankowiak saw otherwise.

The 119-109 card sent Rosado over the edge in the end, cursing at the judges in a scene reminiscent of Michael Conlan's "F*** you" moment to the ring officials in the 2016 Rio Olympics. The Philly-bred boxer took it well beyond that, however, unceremoniously taking a swing at Murray during the post-fight festivities.

He attempted to apologize for the poor lapse in judgment, but in the meantime suffers his second consecutive defeat in falling to 23-11 (13KOs). He is just 2-6-0-1ND in his last nine starts, although any claims of his not needing to consider retirement will be strengthened by the fact that he was competitive throughout and his tender skin survived 12 rounds of combat.

For Murray, it was a much needed win after being run out of the super middleweight division by countryman George Groves last summer. The four-time title challenger advances to 35-4-1 (16KOs) with the victory.

The bout aired live on Sky Sports in the United Kingdom.