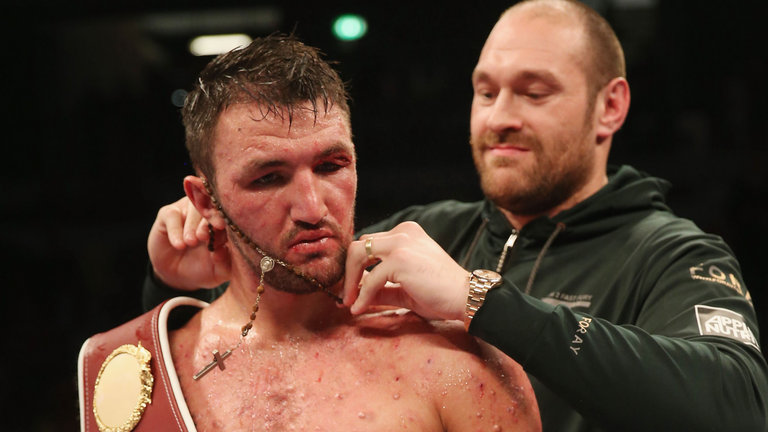 Hughie Fury began 2017 hoping to emulate the past success of his cousin and former World heavyweight champion Tyson Fury as his own title opportunity came to surface.

In the end, he wound up following in his cousin's footsteps in causing the biggest fight of his career to fall apart late in the promotion.

The unbeaten Brit was due to travel to Auckland, New Zealand for a May 6 title clash versus unbeaten beltholder Joseph Parker. Less than 24 hours after the WBO tentatively called the fight off, Fury formally withdrew from the contest, citing a lingering back injury that has hampered his training routine.

"It is with our deepest regret that we have to announce that the WBO World Heavyweight Championship between the Champion, Joseph Parker, and mandatory challenger, Hughie Fury, scheduled for Saturday 6th May 2017 in Auckland, New Zealand, has been postponed," Fury's promoter Mick Hennessy said in a statement through the Hennessy Sports press office. "Hughie has been declared medically unfit to box following a medical assessment. He has suffered an injury to his lower back which has been a serious issue for the last three weeks that has left him unable to train to his full capacity.

"Despite receiving intense physiotherapy treatment and his desire to fight for the WBO World title, after seeing his physiotherapist last Friday he has been advised to rest for 3-4 weeks before resuming training."

Parker and his team sensed something was amiss after arriving in country on Saturday morning following a full training camp in Las Vegas and learning that his opponent hadn't even yet secured travel plans to fly in from England with the bout two weeks away.

Speculation fueled after WBO President Francisco 'Paco' Valcarcel went public with the news that issues within Fury's camp forced the sanctioning body to no longer throw its support behind the matchup, as reported overnight by FightNights.com.

Parker and his promoter, Duco Events are now on the hunt for an available heavyweight contender to jump in on short notice to keep the May 6 show alive. The event is important to Parker, who declared over the weekend that it will be his last in New Zealand at least for the foreseeable future as he would like to travel the world to defend his title and unify with the other champs.

For now, he has to find a new dance partner while Fury is left to ponder what could have been.

"Understandably, Hughie is devastated by the injury which has temporarily halted his dream of fighting for the World Heavyweight Title, but the fight will be rescheduled and a new date will be announced shortly."

The development is eerily similar to the fallout between Tyson Fury and Wladimir Klitschko ahead of their originally scheduled rematch last July. Fury claimed an injury just two weeks prior to the date, only for the rescheduled date to get scrapped as he decided to walk away from the sport for a spell while attempting to conquer drug and alcohol addiction and mental health concerns.

As for his younger cousin, the hope is that their actions aren't viewed as unprofessional, rather just a run of bad luck that complicated matters in terms of properly communicating with Parker's side.

"Hughie and Team Fury wish to express their sincerest apologies to Joseph Parker, the WBO, the fans and public in New Zealand and to all the boxing fans around the world who had been looking forward to the highly anticipated fight."