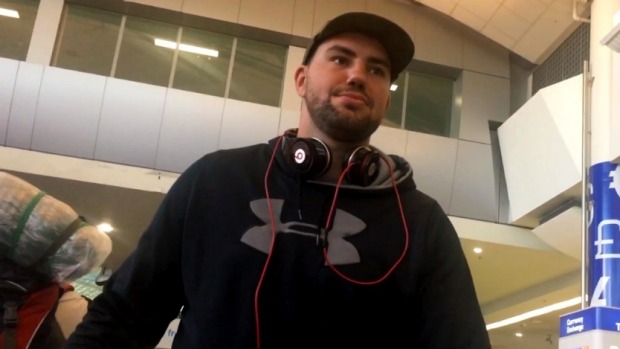 Razvan Cojanu was all smiles as he touched down in Auckland, New Zealand on Wednesday morning (local time). Sporting an Under Armour hoodie sweatshirt and Beats Audio head phones, he gleefully nodded hello to those who passed by him at Auckland Airport, either simply amazed at the sight of a 6'7" gentleman strolling through the airport or aware that he arrived in town to save a local promotion.

The Romanian heavyweight - now based out of Burbank, California - answered the call to step in and face former sparring partner and reigning heavyweight titlist Joseph Parker on short notice, as the two will collide on May 6 at a venue to be determined. A full press conference is planned for Wednesday afternoon in Auckland, where promoter Duco Events will reveal all of the details including a possible switch in venues.

Cojanu (16-2, 9KOs) replaces unbeaten Hughie Fury, who claimed to have aggravated an old back injury which hindered his training to the point of having to withdraw from his mandatory title challenge.

Duco Events insisted all along that the show would go on, hitting the ground running no sooner than they found out from the World Boxing Organization (WBO) that Fury was no longer eligible to fight. The mission was to find an opponent in the WBO Top 15, with Parker adding the demand that it be a boxer they knew was already in training.

Cojanu fit the bill down to the letter, as he's ranked #14 by the WBO and was previously in camp with Parker to help him prepare for Fury. Given his height, Cojanu has gained a lot of work as a chief sparring partner for the likes of Parker, Dillian Whyte and former heavyweight titlists Alexander Povetkin and Charles Martin.

Parker (22-0, 18KOs) will make the first defense of the title he acquired in a hard-fought majority decision win over Andy Ruiz last December. His bout with Fury was to take place at the Spark Arena - the same 12,000-seat venue (though under a different name) at which he beat Ruiz - but there has been speculation that with the late-change and lesser known opponent will come a move to a smaller fight site.

While once a promising amateur with more than 300 fights and four Romanian championships, Cojanu hasn't progressed beyond fringe contender in the pro ranks. Stateside boxing fans best remember him as a participant in the ESPN2 Boxcino heavyweight tournament in 2015, advancing to the semifinals before getting knocked out by Donovan Dennis in just under four minutes of ring action.

The loss was his first since his pro debut, rattling off 11 wins before exiting from the Boxcino tournament and has since won three in a row as he heads into the biggest opportunity of his young career.