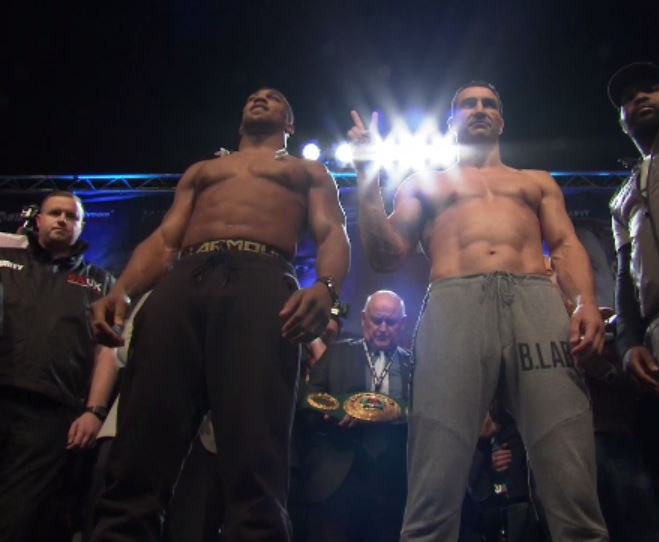 The amount of trash talk that has come with the buildup to this weekend's epic heavyweight championship clash was as sparse as the amount of fat to be seen on either combatant.

Anthony Joshua and Wladimir Klitschko have conducted themselves as consummate professionals every step of the way, their chiseled physiques further telling that tale at Friday's weigh-in ahead of their title fight Saturday evening. A jam-packed record-breaking crowd of 90,000 will be in attendance at Wembley Stadium in London, England in support of the biggest heavyweight bout in the past 15 years.

Both combatants did their part to live up to the event's massive hype. Joshua (18-0, 18KOs) hit the scales at a career-heaviest but still finely-chiseled 250.1 lbs., while Klitschko (64-4, 53KOs) checked in at 240.6 lbs., his lightest weight in nearly seven years.

The last time Klitschko was this light for a prize fight was in June '09, when he claimed the World (lineal) heavyweight championship with a 9th round stoppage of Ruslan Chagaev. Joshua was 19 at the time and a mere two years into his run as an amateur boxer.

The last time that Klitschko - who captured Olympic Gold in 1996, prior to Joshua's 7th birthday - entered the ring as a beltless title challenger was the ringwalk for his April '06 title fight rematch with Chris Byrd, whom he stopped in seven rounds. Joshua was just 16 years old at the time, and hadn't even yet taken up the sport.

While a theme is to be found, it doesn't at all factor into their current career states. Joshua enters the ring as the betting favorite and rightly so. The 2012 Olympic Gold medalist has literally been a knockout every time out, including his making a big splash to win the crown just over one year ago in a two-round annihilation of Charles Martin. Two defenses have followed, battering Dominic Breazeale in seven rounds last June before capping his breakout 2016 campaign with a three-round destruction of Eric Molina last December.

The latter bout was intended for a showdown with Klitschko, whom at the time was debating whether to pursue a clash with Joshua or chase a vacant title in an intended showdown with unbeaten Lucas Browne. Neither bout transpired, although that very belt he eyed will be at stake this weekend, along with Joshua's trinket.

Klitschko's indecision comes at a price, however. He enters the fight as a 41-year old former champion who hasn't fought since a disappointing - and painfully dull -12-round decision defeat to Tyson Fury in Nov. '15. The defeated ended his championship reign that extended 9 1/2 years and 18 successful title defenses.

The level of attention surrounding this clash was enough to convince American cable giants HBO and Showtime to put aside their differences and present coverage in sort of a joint venture. Showtime will air the event live on its flagship station (4:15pm ET), while HBO will pick up the same-day tape-delay feed later in the evening (11:00pm ET).

Sky Box Office is the provider of choice in the United Kingdom where the bout is staged, while fans in Mexico can catch the action on Televisa.

While weights don't contractually matter in heavyweight contests, they affect all of the 16 remaining weight classes. As much was realized in an intended lightweight title eliminator between Luke Campbell and Darleys Perez.

Campbell (16-1, 13KOs) - who captured Olympic Gold alongside Joshua in the 2012 London Olympics - did his part in checking in at 134.3 lbs. for his first career title elimination bout. The 29-year old enters the bout riding a four-fight win streak following a shocking split decision loss to Yvan Mendy in Dec. '15.

Perez (33-2-2, 22KOs) still has some work to do if he wants to be eligible for another title shot with a win on Saturday. A member of the 2008 Colombia Olympic boxing team that competed in Beijing, the 33-year old former titlist weighed 136.3 lbs. on his first attempt. He has two hours to shed 1.3 lbs., or else will be subject to a fine and also will no longer be eligible to vie for the mandatory ranking and the right to next face unified titlist Jorge Linares.

In another title eliminator on the undercard, Scott Quigg and Viorel Simion battle to determine the next in line for the winner of the forthcoming featherweight title clash between current beltholder Lee Selby and challenger Jonathan Barros.

Quigg (32-1-2, 24KOs) weighed 125.7 lbs. for the occasion, fighting for the second time as a featherweight and his first under the tutelage of Hall of Fame trainer Freddie Roach. The 28-year old Brit previously served as a super bantamweight titlist before losing his crown to bitter rival Carl Frampton in their title unification clash in front of a sold-out crowd at Manchester (England) Arena last February.

Simion (21-1, 9KOs) was slightly lighter at 125.6 lbs. for his first career title elimination contest. The 35-year old from Romania has fought in England just once before, also producing his lone career loss in a 12-round defeat to Selby in July '13. He's won every bout since then, however just five fights in nearly four years since the setback.