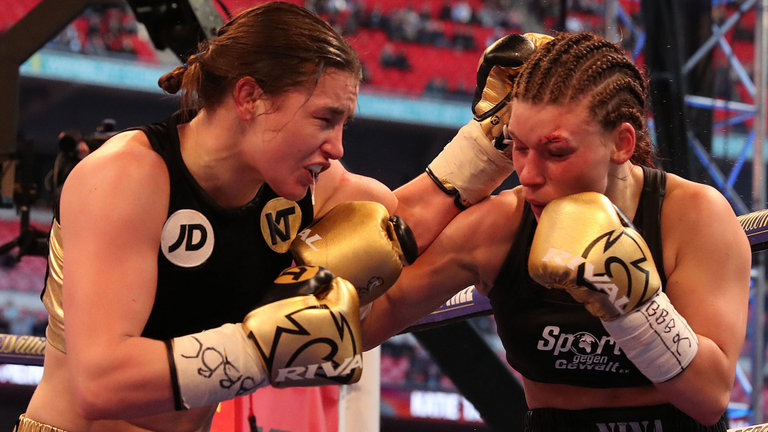 Katie Taylor continues to add to her growing reputation as a star in the making, extending her unbeaten run in the pro ranks with a 7th round stoppage of Germany's Nina Meinke (5-1, 2KOs).

Taylor and Joshua both claimed Olympic Gold in the 2012 London Olympics for Ireland and Great Britain, respectively. While Joshua has since bursted his way onto the heavyweight title scene, Taylor opted to remain in the amateurs long enough to compete in the 2016 Rio Olympics, only to suffer a stunning opening round exit in one of several controversial losses suffered by the 2016 Ireland Olympic boxing squad.

The 30-year old lightweight decided there was no more time to waste in getting a jump on her pro career. Already five fights deep in just five months, Taylor was in control for the majority of the bout versus her previously undefeated foe. As it appeared the contest would go the full distance, referee Howard John Foster was forced to stop the contest upon advice from the ringside physician who ruled that a cut over her left eye was too severe to allow the action to continue.

Taylor improves to 5-0 (3KOs), having already logged 29 rounds of ring action since her pro debut last November. Her next bout is expected to come in June or July, with the possibility of her fighting for a world title in the near future.

Opening the show, Joe Cordina picked up his second knockout win in as many weekends, needing exactly two minutes to blast out Sergej Vib (7-8, 4KOs). A pair of knockdowns produced the quick ending for Cordina (2-0, 2KOs), a 2016 Great Britain Olympian who made his pro debut one week ago.