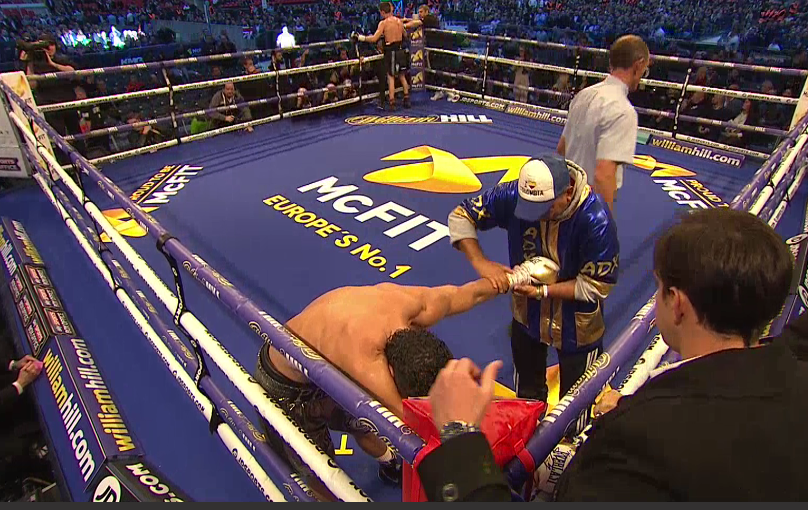 Luke Campbell has punched his way into title contention. Whether or not he's ready for such an opportunity remains to be seen.

The 2012 Olympic Gold medalist for his native Great Britain overcame a slow start to earn a 9th round stoppage over Darleys Perez, who cited an arm injury in bowing out of their lightweight title eliminator. Their bout came in supporting capacity to Saturday's epic heavyweight title clash between unbeaten titlist Anthony Joshua and former World champion Wladimir Klitschko at Wembley Stadium in London, England.

It wasn't easy for Campbell, one of nine boxers on Saturday's bill who carries Olympic pedigree. His pro career hasn't been quite as celebrated as his brilliant amateur run, having already suffered his first loss in Dec. '15, but has now won five in a row.

The latest took a few rounds to get going for Campbell, who dug himself an early hole versus Perez, a member of the 2008 Colombia Olympic boxing team and former lightweight titlist who was quick to take the lead. The surge right out the gate was perhaps atonement for the visiting boxer not only missing weight at Friday's weigh-in, but not even bothering to use the allotted two-hour period to shed the extra 1.3 pounds in disqualifying himself from being eligible to compete for Jorge Linares' lightweight title even with a win on Saturday.

A case can be made that the bulk worked to his advantage for the first few rounds, but proved inconsequential in the long run. Campbell hit his stride in round four and never looked back. Perez fell behind but the adversity to which he couldn't overcome was a possible separated shoulder as he sat in his corner in excruciating pain in between rounds eight and nine. His warrior's heart prompted a "Hell, no!" when asked if he wished for the contest to be stopped prior to the start of round nine, leaping off of his stool in his best effort to bravely soldier on. It didn't quite take, though, as his left arm ultimately gave in, forcing referee Steve Gray to signal the end of the contest.

The official time was 1:00 of round nine.

Campbell (17-1, 14KOs) will now move into the mandatory slot for the title Linares won last year in a thriller over Anthony Crolla before soundly outpointing him in their rematch this past March, with both bouts taking place in Manchester, England. The three-division title claimant also holds a stoppage win over Kevin Mitchell at the O2 Arena in Greenwich in May '15. Campbell has vowed to precent Linares from going 4-0 against UK boxers, although he's yet to show anything in his pro career to suggest any chance of disrupting that run.