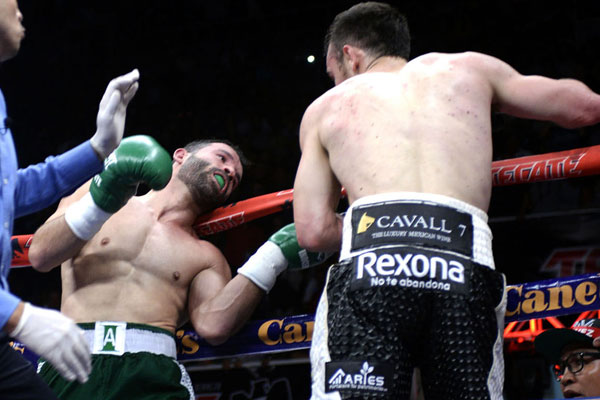 After coming up short twice versus Jorge Paez Jr. and again in a 10-round loss to Ramon Alvarez in Sept. '14, Chavez avenged the latter defeat with a stunning 2nd round stoppage win Saturday evening in Chihuahua, Mexico.

The rematch couldn't have been more perfectly planned, taking place one week before their far more famous and talented brothers Julio Cesar Chavez Jr. and Saul 'Canelo' Alvarez collide in front of a sold-out crowd at T-Mobile Arena in Las Vegas. A bit of extra attention was paid to this matchup, although with Omar Chavez on the downside of his career - and honestly not all that great in whatever prime he enjoyed - few expected anything other that close to a carbon copy of the original.

The experts couldn't have been more wrong.

Alvarez did his part to repeat his points win from their first fight, working behind his jab early and boxing in similar manner to which he was able to have his arms raised in victory in their previous meet. Chavez quickly grew wise to the strategy and stepped up the aggression, stunning Alvarez late in the round but too close to the bell to be able to produce sustained damage.

That would come one round later.

Chavez charged off his stool to go into attack mode in the second frame, and Alvarez was never able to adapt. A flurry of punches had Alvarez in trouble, reeling into the ropes and left vulnerable for an oncoming Chavez who continued to fire away until leaving the referee with no choice but to wave off the contest.

The official time was 2:05 of round two.

It's now four wins in a row for Chavez, who improves to 36-3-1 (24KOs). The less famous son of the legendary Hall of Fame former four-division champ Julio Cesar Chavez Sr. collects arguably the best win of his otherwise journeyman career, the lone exception to that claim perhaps coming in his last win prior to his loss to Alvarez when he outpointed Daniel Sandoval in their May' 04 contest.

Whatever the case, enough profile came from Saturday's contest to earn him at least one more big payday - emphasis on earn, as opposed to just being used as a boxing sideshow attraction due to his famous bloodlines.

Alvarez falls to 24-6-2 (16KOs), having now dropped two of his last three starts. His other setback in that stretch came last summer, valiant in defeat as he pushed a comebacking Antonio Margarito to the brink before coming up short on the cards in their 10-round slugfest.

The bout aired live on TV Azteca in Mexico and beIN Sport Español in the United States.