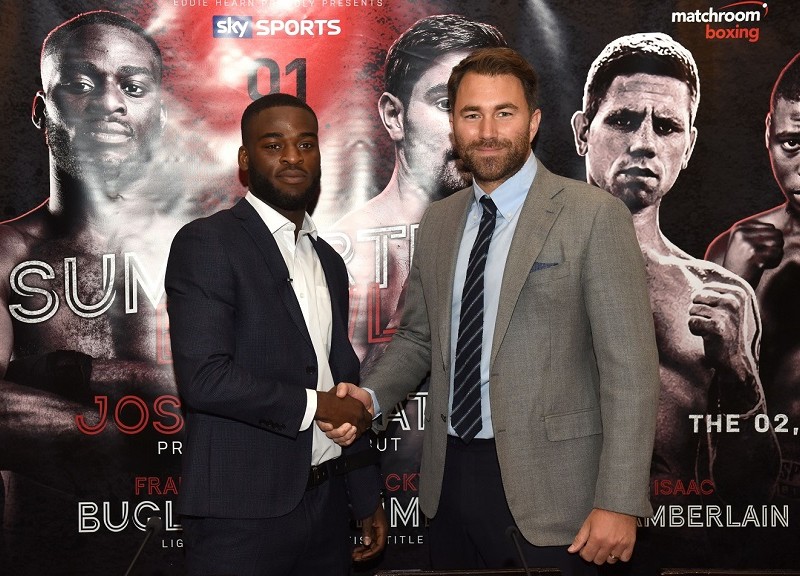 One of the most memorable feel-good stories of the 2016 Rio Olympics has finally declared himself eligible for the pro ranks.

Joshua Buatsi - the surprise light heavyweight contender who captured a Bronze medal for Team Great Britain during the 2016 Summer Olympics in Brazil - announced his plans to turn pro during a press conference held Tuesday afternoon by Eddie Hearn, whose Matchroom Boxing promotional outfit will guide his career.

The first fight for pay will come July 1, where Buatsi will face an opponent to be determined on the undercard of an event to be held at O2 Arena in London. Topping the bill is Frank Buglioni's domestic lightweight title defense versus unbeaten Ricky Summers.

On Tuesday, however, it was all about Matchroom's latest signee.

“I’m delighted to be promoting Joshua,” said Hearn. “Three and a half years ago we were in the same room on the start of Anthony Joshua’s journey and I feel that we’re at the start of the road for another outstanding talent in Joshua Buatsi.

“Everyone in boxing knows the talent and ability he has and now it’s time to show that to a wider audience.”

Buatsi joins Olympic teammates Lawrence Okolie (3-0, 3KOs; will also appear on the undercard), Joe Cordina, Josh Kelly and Anthony Fowler in joining the Matchroom family, and will be managed by unbeaten heavyweight champion Anthony Joshua, the 2012 Olympic Gold medalist who will handle Buatsi under his AJ Boxing label.

Joshua took a special interest in Buatsi during his rise through the amateur ranks. The 24-year old began boxing at age 15, and was dangerously close to represent his birth country of Ghana in the 2016 Games before deciding to instead stick with his home nation of Great Britain.

Little was known of the lean light heavyweight, as he was a late qualifier and without an extensive amateur career. He made waves right out the gate, pulling off the first major upset of the Olympics with a knockout win over Uganda's Kennedy Katende in the opening round of competition. He scored another stoppage win in the Round of 16, halting Uzbekistan's Elshod Rasulov to sprint into the quarterfinal round. A decision win put him in the medal round, where his Cinderella story saw the stroke of midnight as he was swept in three rounds by eventual Silver medalist Adilbek Niyazymbetov.

Following his exit from the Olympics, great anticipation surrounded his eventual turn in the pros. He was among the last from his team to make the decision, but for good reason. He honored a promise made to his parents to finish his education, returning to college to get his Bachelor's degree.

With all loose ends tied up, he's now ready to go all in, and at a time when the United Kingdom is enjoying a golden era in boxing.

“It’s been a long time coming,” said Buatsi. “I got the medal ten months ago but I didn’t just disappear. After coming back from Rio I needed to finish my degree and the get back into the gym. I’ve been in the gym for a few months now, my head is clear, I know what is next. I’ve made the right decision to team up with Eddie Hearn, Matchroom Boxing and Sky Sports and I’m so excited for the journey.

“My Mum and Dad wanted me to finish my education, I came back from Rio and had a year left, I didn’t want to turn my back on university. Boxing has always been my plan A and university wasn’t a plan, it was something that I was able to do while boxing – but everything about me is boxing. It seems a long time ago that I was an amateur. This is the next stage and there’s competition out there, everyone wants to be number one, we’re all hungry. The pro game is so different from the amateurs, you have to entertain, and it’s not a bed of roses. It’s a brutal sport but I’ve prepared myself physically and mentally for it."

His aggressive style always seemed better suited for the pros than in the amateurs, even with the many scoring and style changes in the non-paid ranks. Still, even as much as he went on to achieve in the world of headgear and oversized gloves, he feels the best is yet to come in a world that will better suit his in-ring instincts.

“It’s more of a fight in the pros," acknowledges Buatsi, whose team is already planning for a hectic eight-fight schedule over the final six months of 2017. "Two men fighting with smaller gloves and I think it will suit me, let your hands go, keep your hands up and don’t blink. I know I only have to concentrate on one guy in the pros, not the guy the following day – six rounds to get rid of someone and I know that I will get to them in that time.

“There’s a lot for me to learn but I’m eager and hungry to do just that. I feel I have to prove myself and go and grab everything with both hands, that’s my mentality so let the show begin.”