Dmitry Bivol: I Want To Stay Active, No Rush To The Top 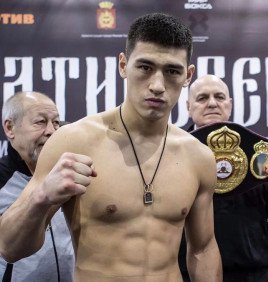 If you were worried about having missed any portion of Dmitry Bivol's surge toward the top of the light heavyweight division, fear not—there remains plenty of time to still catch a glimpse.

Despite fighting for an interim light heavyweight title in just his seventh pro fight, the 26-year old boxer—born in Kyrgyzstan but who came up through the Russia boxing program, where he remains based—had never planned global domination in the infancy of his pro career. Fighting at an accelerated level and through a stream of activity is what remains in the cards, the latest example found in his 10-round clash with Cedric Agnew this Saturday in Las Vegas, barely two months after his U.S. TV debut.

"The plan was never to go slow, but never also to go right to the top," Bivol (10-0, 8KOs) explains to FightNights.com of his intended career arc. "We wanted to advance quickly but that doesn't always mean going straight for the best guys."

The latter formula is reserved for the likes of Ukraine's Vasyl Lomachenko, arguably the greatest amateur boxer of all time who fought for a world title in just his second pro fight and became a champ by fight number three. While no slouch in the amateur ranks himself, Bivol—who boasted a record of 268-15 before turning pro in 2014—preferred to seek experienced opposition while further honing his craft, an art that is still being perfected in this his third year as a prizefighter.

It's why he fights an experienced gatekeeper like Agnew on the HBO Pay-Per-View undercard of the light heavyweight championship rematch between Andre Ward and Sergey Kovalev rather than hold out for the winner.

"This is a good next step for my career," Bivol believes. "It's a chance to show the boxing world my potential in the light heavyweight division, on a show where the two best light heavyweights in the world meet for the second time."

The opportunity was available immediately in the aftermath of his U.S. TV debut, an impressive 4th round knockout of Samuel Clarkson this past April in Oxon Hill, Maryland. Bivol had fought before on U.S. soil, having appeared twice in California six months apart in 2015 and 2016, but never on an American television outlet. His first impression was lasting, as the ease in which he dispatched of the normally durable Clarkson had viewers longing for more.

"After the last fight, Vadim (Kornilov, Bivol's manager) told me there was a chance to fight on this card. I said yes of course," Bivol reveals. "As long as I can keep ending fights early, then sure I would love to keep fighting every 2-3 month. If I'm forced to go longer, then we would need to take a break.

"The last one didn't go very long, so it's no problem coming back in two months."

The placement serves a dual purpose as it gives boxing audiences the chance to gauge what awaits the winner down the road, even if not necessarily in the immediate future.

"One day, sure I'd love to fight Andre Ward or Sergey Kovalev," Bivol admits, although with a disclaimer. "I'm not ready for that yet, though. I wouldn't mind fighting (secondary titlist) Nathan Cleverly later this year, or someone on that level (a Top 10 opponent). Every fight builds to something bigger. Last fight, I was able to fight in front of a U.S. TV audience. Now I get to fight on HBO (PPV) for the first time.

"With a win (on Saturday), I'd love to come back to the U.S. and fight again on TV. It's one fight at a time for us, so we will see what happens here and determine the next best step."

Saturday's bout was downgraded to a 10-round non-title fight due to his opponent not being deemed fit to fight 12 rounds in Nevada (despite the commission making far stranger and contradictory choices in recent days regarding a certain summer event). Still, Agnew comes with championship pedigree of sorts, having challenged Kovalev for his light heavyweight title back in 2014—a fight which resulted in the first loss of his pro career. The 30-year old southpaw sought to bounce back, but was upended two fights later by Clarkson in Feb. '15, having since won two straight versus nondescript opposition.

With that, it's understandable why a commission would refuse to sanction the Chicago-bred boxer in a championship bout versus the likes of Bivol, who boasted a 268-15 amateur record and numerous major tournament wins before bringing his talents to the pro ranks.

In any other country, he would have easily qualified for the Olympics. However, Bivol had the misfortune of campaigning in the same weight class as Egor Mekhontsev, a stud amateur and 2012 Olympic Gold medalist but whose pro career hasn't quite taken off just yet.

Meanwhile, Bivol is already in the conversation when talks turn to the best ten light heavyweights in the world today. Naturally, fans want to see more with each fight and thus expect him to run alongside the likes of Ward, Kovalev or lineal champion Adonis Stevenson sooner rather than later.

To that comes the plea of not mistaking advancement for rushing to the top.

"Of course I am grateful for any praise from the boxing fans and media," Bivol admits. "However, I do not feel that just 10 fights is enough to be on that (elite) level. I try not to focus on where I'm ranked and it's not why I fight the opposition that I do face in the ring.

"We are on the course we planned when we turned pro and each fight gets me closer. We want to fight at an advanced pace, but there also has to be patience along with such a journey in order to fully develop and (ultimately) succeed.

"So for me, a successful 2017 would be to win (on Saturday), then get at least two more fights by the end of the year against Top 20 and then a Top 10 opponent. After that, we can start to focus on great fights like the winner (of Ward-Kovalev II)."