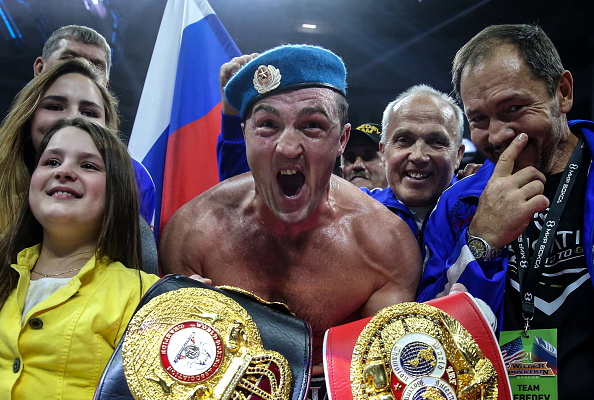 After going a full year without a cruiserweight title fight, the World Boxing Association (WBA) finally decided that having three guys claiming to be champ at the weight no longer made sense—especially if the sanctioning body isn't making dollars.

The oft-injured Beibut Shumenov was finally removed from the mix after an eye injury has medically disqualified him from competing anytime soon. With that came two key decisions made by the WBA on Monday:

- First, to promote unbeaten Yunier Dorticos from "interim" to "Regular" cruiserweight champion, essentially replacing Shumenov whom he was supposed to fight in their eventually canceled matchup this past March

- With that, the declaration that Dorticos is first in line for the winner of an optional title fight between WBA "Super" cruiserweight champion Denis Lebedev and Mark Flanagan, a challenger from Australia who should do well to continue the years-long trend of overmatched Australian challengers competing in title fights.

Lebedev makes his optional defense on July 10, but is essentially on the hook to face Dorticos within 120 days. The Russian slugger will not be permitted to enter negotiations for anyone other than Dorticos, a ruling that includes pursuing any potential unification clashes.

Strangely, Lebedev (29-3, 22KOs) is the only one of the WBA cruiserweight title lot to have fought in the past 365 days. It came in a 12-round loss to Murat Gassiev in a billed cruiserweight title unification clash, but where Lebedev's WBA belt was not at stake.

His previous bout came on a weekend where the WBA was throwing cruiserweight titles in the air for anyone to grab. Lebedev savagely beat down Lateef Kayode in eight rounds in Russia last May, hours before Shumenov (17-2, 11KOs) became a two-division titlist after stopping Junior Wright in the 10th round of their vacant "Regular" title fight.

One day prior, Dorticos—an unbeaten two-fisted knockout artist from Miami by way of Cuba—proved his heart was as tough as his punching power, storming through hell and back to outlast and eventually stop Youri Kalenga in the 10th round of their underrated instant classic last May in France.

He's since spent the past year chasing a title consolidation clash with Shumemov, whom did his best to stall while chasing his own battle with Lebedev—the latter pairing which was actually ordered by the WBA last May, with the winner due to face Dorticos.

Naturally, none of it ever materialized.

The closest any of them came to meeting was when Dorticos and Shumenov were slated to headline a Premier Boxing Champions (PBC) on FS1 show in Las Vegas this past March. Naturally, the bout hit the scrap heap when Shumenov came up as a medical scratch.

While Lebedev benefits from a voluntary stay-busy title defense, Dorticos remains on the inactive roster. He was rumored to be heading for the World Boxing Super Series cruiserweight tournament, although this latest ruling could prompt the 31-year to continue to take a wait-and-see approach in hopes that a Lebedev title consolidation bout actually materializes in 2017.